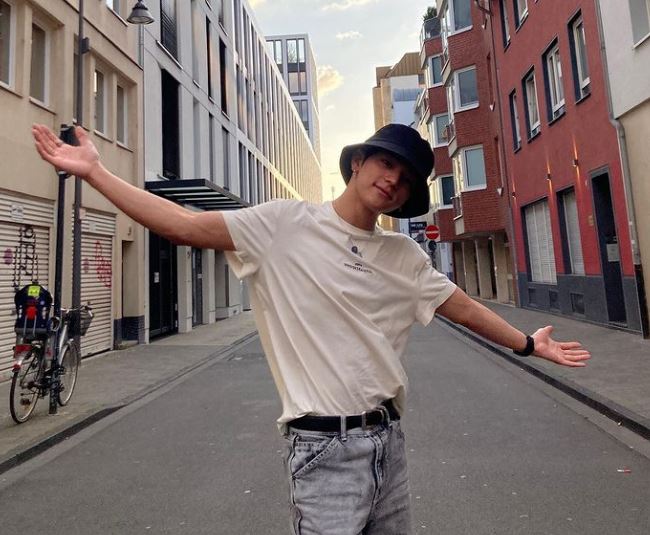 Kim Woojin has recently successfully concluded the European leg of his world tour titled “1ST WORLD TOUR 2022 ‘STILL DREAM’”, creating unforgettable memories with fans across the continent. You can read our coverage article to find out how the fans in Czechia enjoyed his concert in Prague.

Despite the incredibly busy tour schedule, the artist dedicated some time in between the shows to KMUSIC as well and talked about his first mini album and the tour itself. Are you curious? Then keep on reading.

You have released your first mini album “The Moment : A Minor (未成年 )” last year. What was the source of inspiration for the creation of this album?
“I thought a lot about what my album should say. As Kim Woojin, I made the album with the theme “minor” which everyone has already experienced and sympathized with.”

Do you have a song from this album which is somehow special to you?
“All the songs on the album are special and precious to me, but  “Still Dream” is the first song I performed as solo singer, Kim Woojin, so it is the most memorable one. I think overcoming hardships and moving forward is well portrayed in the lyrics.”

This year, you have embarked on a world tour titled “Still Dream“. How did you enjoy the preparations for this tour?
“Since it was my first world tour, I was nervous and worried during the preparation process. I thought a lot about how to fill one and a half hours, and worked hard to give a great performance. Plus I was very excited to meet CUBS [name of the fandom; note by the writer] from all over the world!”

What are three things you look forward to the most on this tour?
“I am looking forward to meeting the Cubs in person, the excitement of the Cubs in the concert halls and the atmosphere of each country. We have already finished a few performances and it was a very enjoyable and happy time with Cubs!”

Were you able to try the local cuisine or learn something about the countries while travelling?
“I tried the local food of each country on several occasions and it was very delicious. It made me think that it is the representative food of that country for a reason. Rather than learning, I was inspired by the buildings and atmosphere of each country.”

Travel during a summer tour is exceptionally tiring, how do you recharge or relax after a hard long day?
“There is nothing special. I do not eat much when I concentrate on the performance, so when I return to the accommodation afterwards, I eat dinner and have a rest.”

You prepared  many  surprises  for  the  fans  attending  your  concerts,  from  QaA  to  photos,  was  there something by which the fans pleasantly surprised you?
“Slogan which was made for me for the concert? There was a moment when the Cubs held the paper together and I was touched they so kindheartedly prepared it for me! As expected, Cubs!”

What are your dreams for the future?
“I want to enjoy making the music I do, and give a happy energy through it to those who know my music or love me.”

Do you have any message to your fans?
“Finally, Kim Woojin´s world tour has begun. Thank you to all the Cubs who waited for me for a long time. Let’s continue to happily walk together. I love you, Cubs❤️ Thank you!”

KMUSIC would like to thank Onion Production who made this interview possible, and we wish Kim Woojin all the best for his future projects. If you want to stay updated about his work, follow Kim Woojin on his social accounts (for example YouTube) to not miss out on anything.

As mentioned you can also read coverage of the Prague concert.