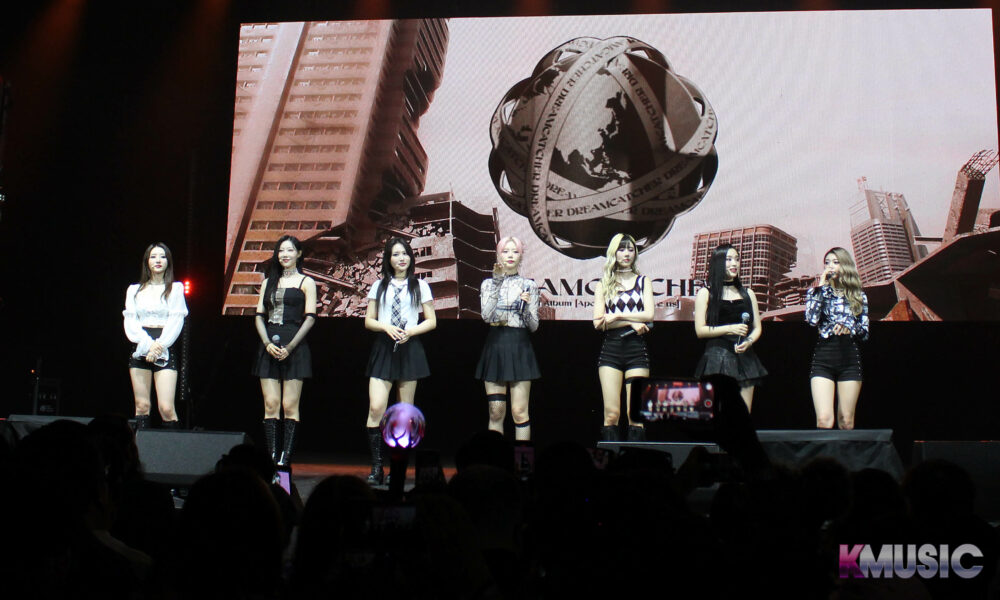 Dreamcatcher returned to the U.S. for their second U.S. tour, [Apocalypse: Save Us] this past month. Rounding out the stateside portion of their tour, the group had two nights of concert in Los Angeles on July 16th and 17th.

The show kicked off with a few of the group’s most popular songs, including “Maison” and “Piri,” showing off their strong choreography and dancing, rapping, and vocals straight off the bat. The group made it a point to change their setlist for each of their shows, to keep fans on their toes. With such intense choreography and music, it would be easy to lose steam partway through the show, but Dreamcatcher did the exact opposite. As the group performed throughout the night, listening to the sounds of their fans, InSomnia, the girls only gained more energy and performed even harder. In between songs of varying genres to show off the group’s skills, English stages were prepared as well, with “Can’t Get You Out of My Head” and “Tension” being performed as surprise gifts for their stateside fans.

Aside from a slew of their most popular title tracks, including “Scream,” “Deja Vu,” and “BOCA,” the group also prepared special short solo stages for their precious InSomnia. SuA performed a dance to “No Dot,” Siyeon sang a dreamy snippet of “Entrancing,” JiU performed a playful part of “Cherry (Real Miracle)”, Handong prepared a cute bit of “Winter,” Yoohyeon danced a sensual snippet of “For,” Dami prepped a cheerful choreography to “Beauty Full,” and Gahyeon finished off with a fun rendition of “Playground.” Slowing things down, the seven girls made sure to sing some of their more sentimental songs, like “Jazz Bar” and “Always,” which they coined as letters written to their fans, too. Wanting especially to thank their fans for their accomplishments, they even mentioned their long awaited first win, which happened earlier this year thanks to their dedicated fanbase. Despite having such girl crush, cool images while performing, the group flipped the switch 180° when it came to their fans. Discussing in depth their love for Los Angeles, the group mentioned visiting Pink’s Hot Dogs, In N Out, and Universal Studios, and wanting to stop by a Dodgers game.

During and between songs, the seven members made sure to throw as many hearts and poses to the crowd as possible, greeting each fan to the best of their abilities while on stage. Looking towards both the floor and up towards the balcony, the group remembered to shower love to everyone in attendance. Preparing as much as they could for fans, they even brought member signed balls to throw into the audience. Dreamcatcher also grabbed phones, slogans, flowers, hats, cardigans, and more from their awaiting fans, much to their delight. Knowing everyone would be overly excited for the show, the group even prepared a signal for fans to do a large “X” over their heads in case they needed any medical attention, just to make sure everyone would stay safe. Aside from their sweet interactions with fans, the group also had fun playing around together on stage. Headbanging, doing silly dances, and constantly grabbing each other by their bottoms, Dreamcatcher showed off their close bond with each other. The group also mentioned how Handong had been unable to tour with them on their last tour, and how grateful they were to be able to come as a full group.

Leaving InSomnia with only happy dreams to reminisce on after tonight’s show, the group finished off their U.S. tour with a truly memorable night. The [Apocalypse: Save Us] tour certainly made an impression on the fans, who came dressed in capes and wielding the group’s scepter-like lightstick, who are ready to wait eagerly until the next time they’re able to see their favorite girl group again. Special thank you to MyMusicTaste for allowing Officially Kmusic to attend the show! Make sure to head to our Facebook page now to view more photos from the show.