MONSTA X have been making headlines for all the right reasons. After closing out last year with 38 million YouTube views for ‘Shoot Out‘, they leaped into 2019 with successful releases for the Steve Aoki collaboration ‘Play It Cool‘ and ‘Alligator‘, both off of their fourth studio album, ‘Take.2 We Are Here‘.

MONSTA X first came down under in 2017 for KCON Australia, smashing their first performance here in Qudos Bank Arena, along with EXO, Cosmic Girls (WJSN), Girls Day, Pentagon, SF9, Up10tion, Victon, and Wanna One. No one, not even MONSTA X fan group Monbebe (translation: My-Baby) could have expected the boys to come back down under so soon. But we are certainly glad they did. 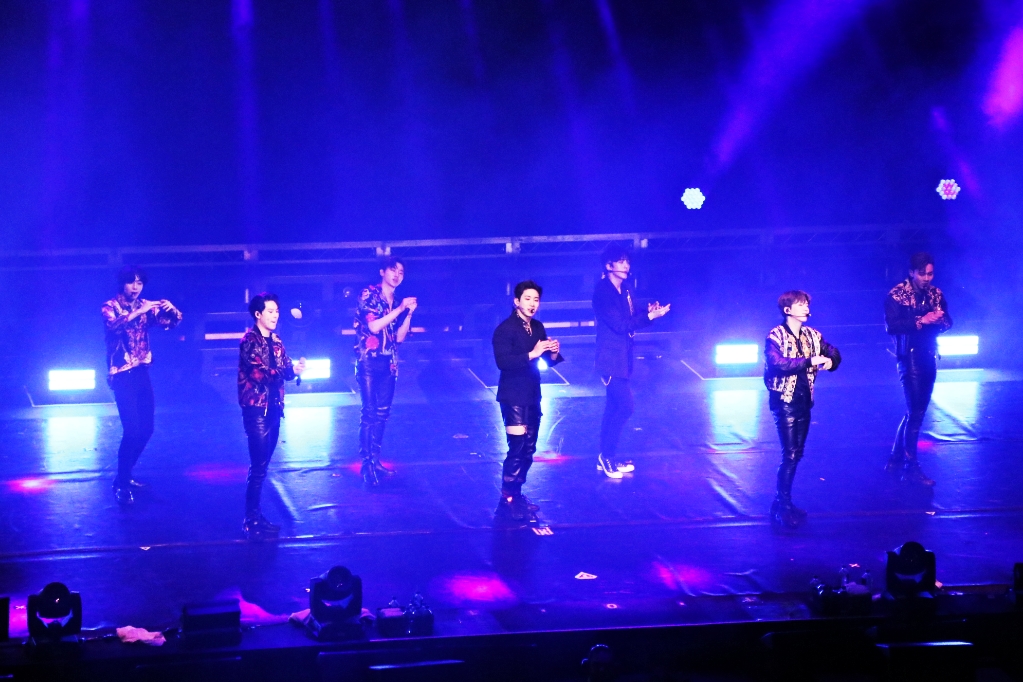 In 7 degree winter weather, rain trickled down as Monbebe standing ticket holders lined up hours in advance to get their pick of position. Shownu, Wonho, Minhyuk, Kihyun, Hyungwon, Joohoney, and I.M. could not come any sooner, so much that girls were glued to their screens and mouthing the lyrics to MONSTA X tracks in preparation. Rumour had it that Wonho’s 6-pack and Shownu’s chest might make an appearance.

The boys kicked off with their most popular song from 2018, ‘Shoot Out‘, red and black fire animations popping in the background as they sang “walker walker walker growling.” Next came the MONSTA X staple ‘HERO‘ as I.M. shouted “I can be your hero Sydney!” They wrapped up the first stage with the psychedelic ‘Trespass‘ before taking a moment to talk to the fans.

“Did you guys miss us? Or miss me?” Minhyuk joked.

“Hello my lovely Australian mates, nice to meet you. it’s really cold outside right. Well now it can be warm”, Kihyun said.

Following the introductions, Shownu gave us his best attempt at tough cuteness, before introducing the next stage in a coy fashion.

The stage transformed into a bar setting as the boys moved into ‘Party Time‘, the Korean version of ‘Play It Cool‘, ‘MOHAE‘, and ‘Jealousy‘.

From the opening of the show, the dancing and energy from the boys was entirely natural and in synch, following their moves to the tee. However, there was a sense of stiffness to the movements during the opening songs similar to following a routine. The opening stages weren’t quite as energetic as expected, even with a song as wild as ‘Shoot Out‘. But as one of the early shows in their world tour, it’s no surprise that the boys needed to warm up and get a vibe for the audience, making for a night that heated up as the night went on. Every stage, song, and performance got better and better, the boys becoming looser and more comfortable as they pumped through their energetic set list, giving Monbebe a night they’d never forget. 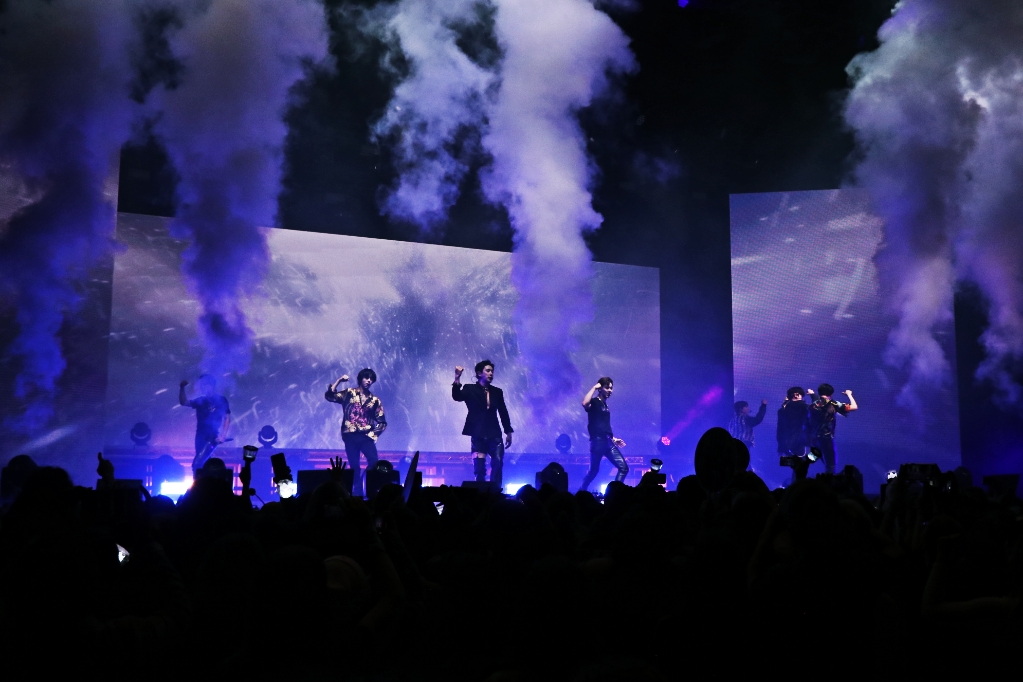 Throughout the evening, MONSTA X played songs that appealed to their newer fans, from 2017 and onwards. The fans screamed constantly while MONSTA X were on stage, even when they were just talking, showing how much they loved the boys.

VCR’s and home videos that show a more personal side of Korean pop groups have always existed, but I hadn’t seen one quite like MONSTA X‘s before. Each band member was positioned as having their own YouTube channel, from Shownu’s ASMR Mukbang channel to Wonho’s stretching exercises.

Following the home video came three of the most exciting and varied Unit performances that I’ve seen in recent history. Even better was that each of these tracks were unreleased, meaning that still aren’t any high quality versions of the songs (though I did rigorously search the internet with no luck).

Kihyun, Hyungwon, and Minhyuk kicked off the Unit stage with a superbly sensual dance performance to Bazzi’s ‘Myself‘. “I’m better myself,” the boys sang.

As good as it was to see Kihyun, Hyungwon, and Minhyuk grind sexily to ‘Myself‘, the cake has to go to rappers’ Joohoney and I.M.’s banger track, ‘Sambakjja‘. The fiery Chinese symbolism denotated from the phrase ‘Sambakjja‘ was said to represent “the beat that a measure becomes triple time in music. Three elements that must exist in a certain object.” In short, Joohoney and I.M.’s (with a mysterious unknown) are a triple threat, three combo, or triple rhythm and we should adore them wholeheartedly. Joohoney also took off his jacket to reveal his shoulders before showing off his drumming skills and blowing us all away, in case you were wondering. 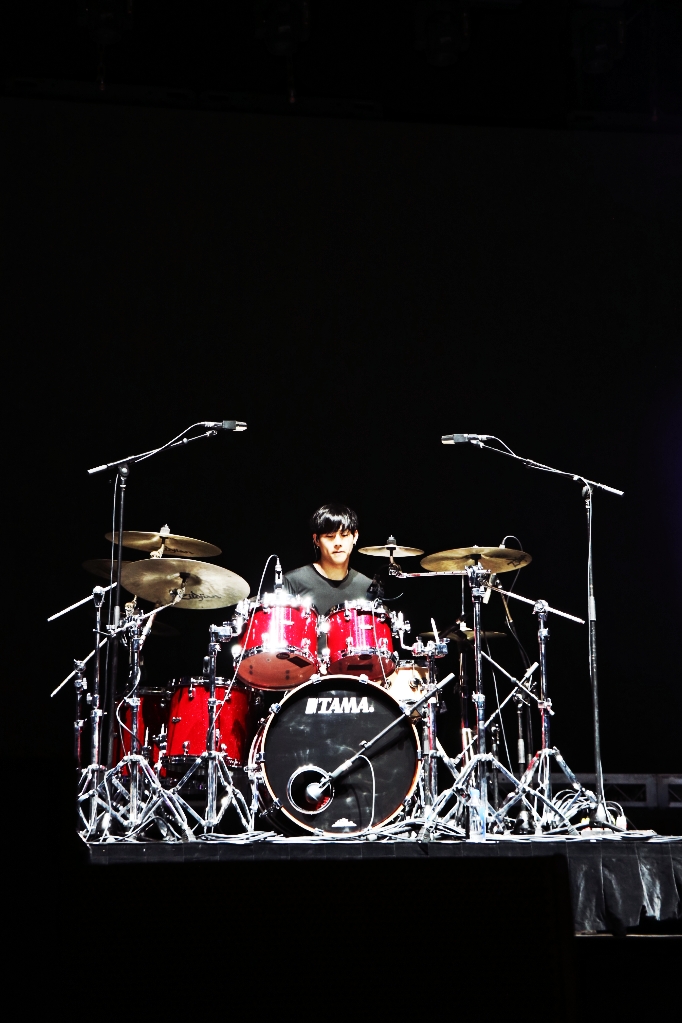 Next, Shownu and Wonho emerged from the darkness for ‘Mirror‘, during which the two members danced opposite each other with a giant wall in between them. Shownu also lifted up his shirt just long enough for fans to note his chiseled abs. This performance was incredibly impressive as the two attempted to remain in sync based on their memorisation of the moves, rather than a visual cue like having the dance in front of them. 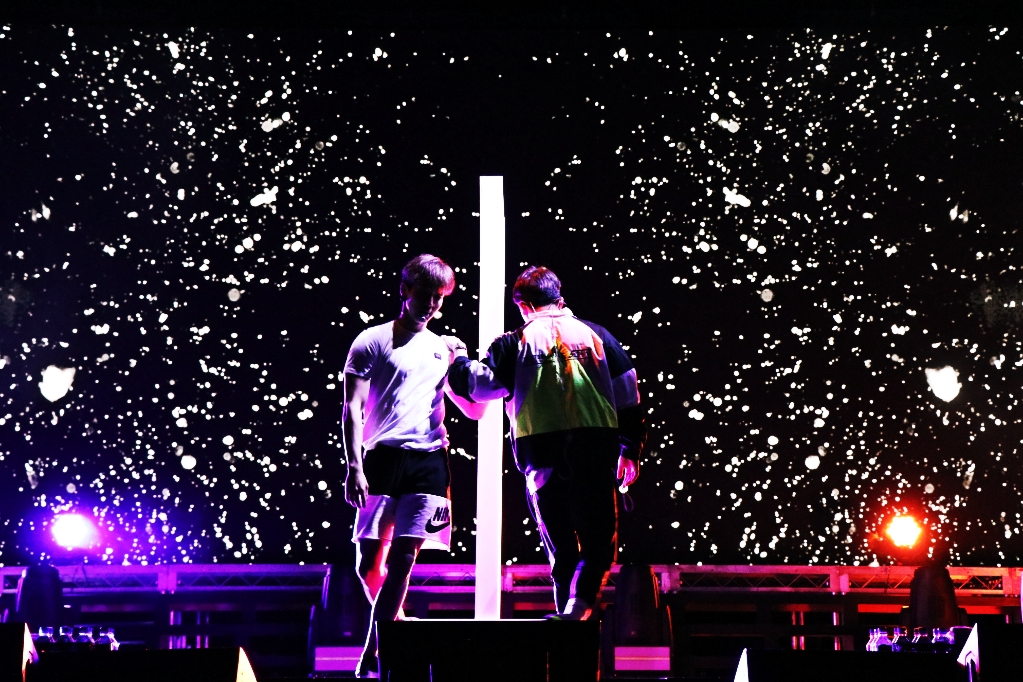 Following the Unit stage’s end, Kihyun, Hyungwon, and Minhyuk came out in kids uniforms with shorts far too short as they fumbled around like the three stooges.

“Our older brothers gave a great performance, didn’t they? But you liked ours more right? Most important, you guys just saw us perform ‘Myself‘. So, who is the most sexy out of us?”

The trio appealed to the fans to determine who was the sexiest, but a conclusion could not be reached. They also debated the ability to be both sexy and cute at the same time, that is until I.M. and Joohoney returned to stage, fresh after finishing ‘Sambakjja‘.

“What do you think the three combo is everyone?” I.M. asked.

“Me, Changkyun is the first heat. Juheon the second. And you guys are the third, the fire.”

Wonho and Shownu then briefly explained their ‘Mirror‘ segment as they seemed eager to start singing and dancing again.

“‘Mirror‘ is actually a really sad song guys. But I like it,” Shownu said.

Following the explanation of the Unit stage, the boys jumped back into song, performing ‘Neolhada‘, ‘White Sugar‘, ‘No Reason‘, Myself, Dramarama‘, ‘Oh My’, ‘Special‘, and ‘Fallin‘. 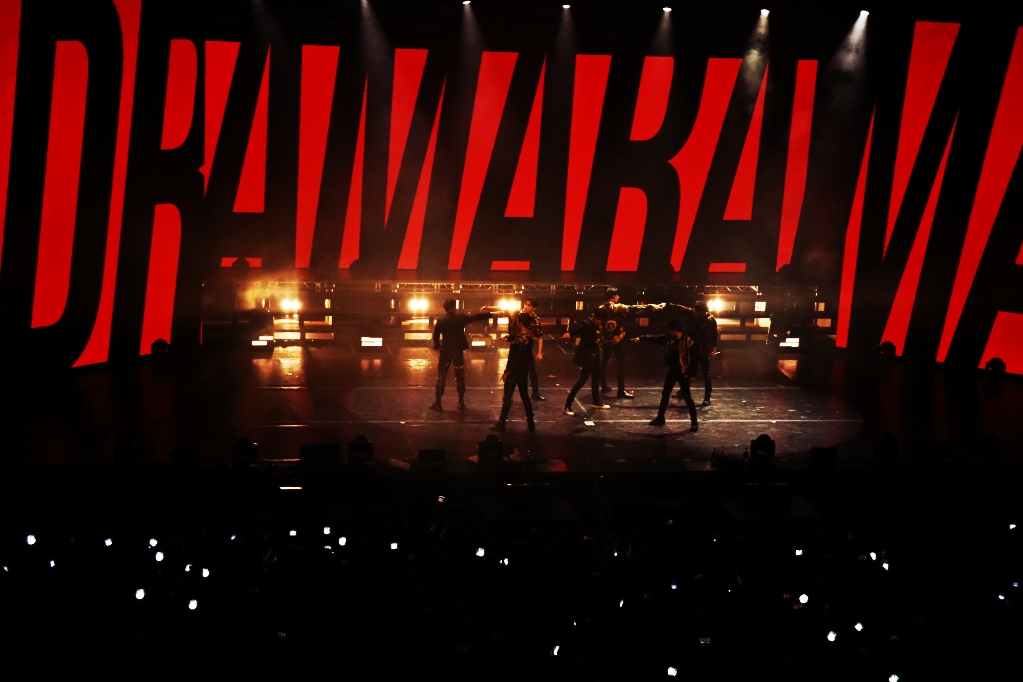 A rather eerie VCR positioned MONSTA X as the seven deadly sins in criminal fashion. Each of them reflected an element of sin, but deeply noted “you are the reason of good and evil in me. I want to be free, through your love that will save me from this deep swamp.” Friendship, fans, and family are the only powers that matter.

‘Fallin’ was especially lit as Wonho threw water at the crowd and the audience jumped at the drop. Immediately after, I.M. questioned:

“Do you guys wanna do that again? Well, we aren’t going to unless you guys scream.”

At that moment, the ICC became a club. 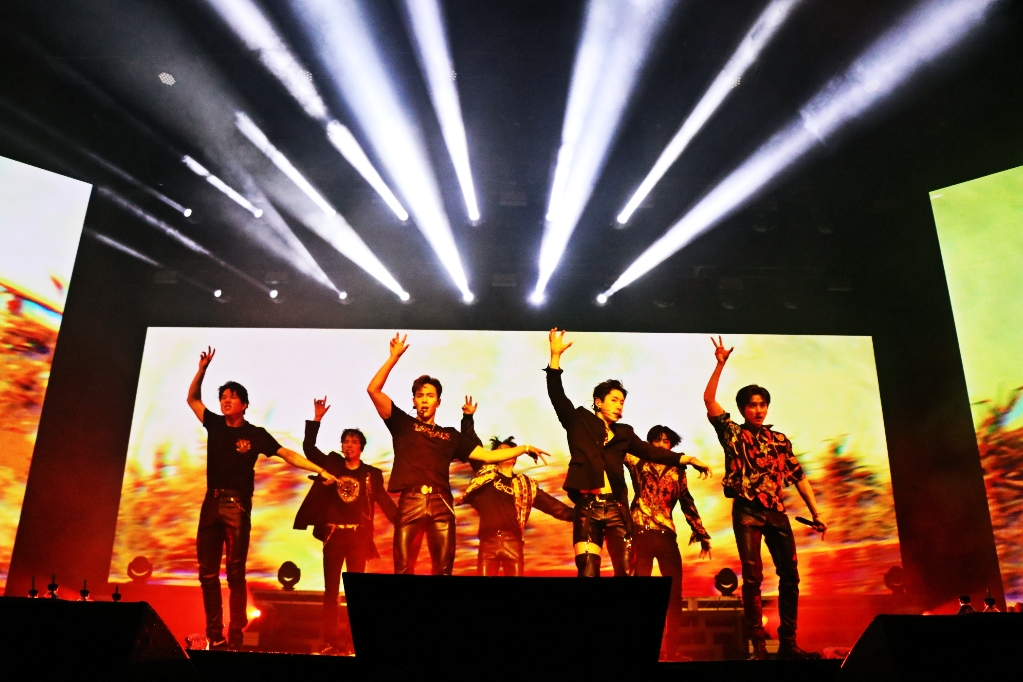 Nearing the end of the night, the boys took the moment to thank the fans and promise their return. Despite having english speaker I.M. to translate when they needed help, each of the boys did their hardest to communicate to their Sydney fans without any help.

“You guys deserve more better stages and a better performance. We will keep developing themselves”, they said.

“Now guys, I bet you’re also wondering why we made this stage so wet? Well, sometimes there’s a deep swamp…”

This not so subtle thought led us into MONSTA X‘s latest hit, ‘Alligator‘.

Disappearing off the stage, their absence didn’t last as  chants of ‘encore’ and cries of MONSTA X’s name pulled the boys back on. They didn’t have a choice, to be honest.

Hyungwon returned to stage as DJ H.One. For anyone that doesn’t know, Hyungwon frequents Ultra Music Festival as a DJ and appealed to our Western dance culture with hardcore tracks and shuffle beats.

“Woah. The vibe became amazing because of H.One. What do you guys think? I.M. asked.

“That (Hyungwon) was so sexy right? Shownu said. 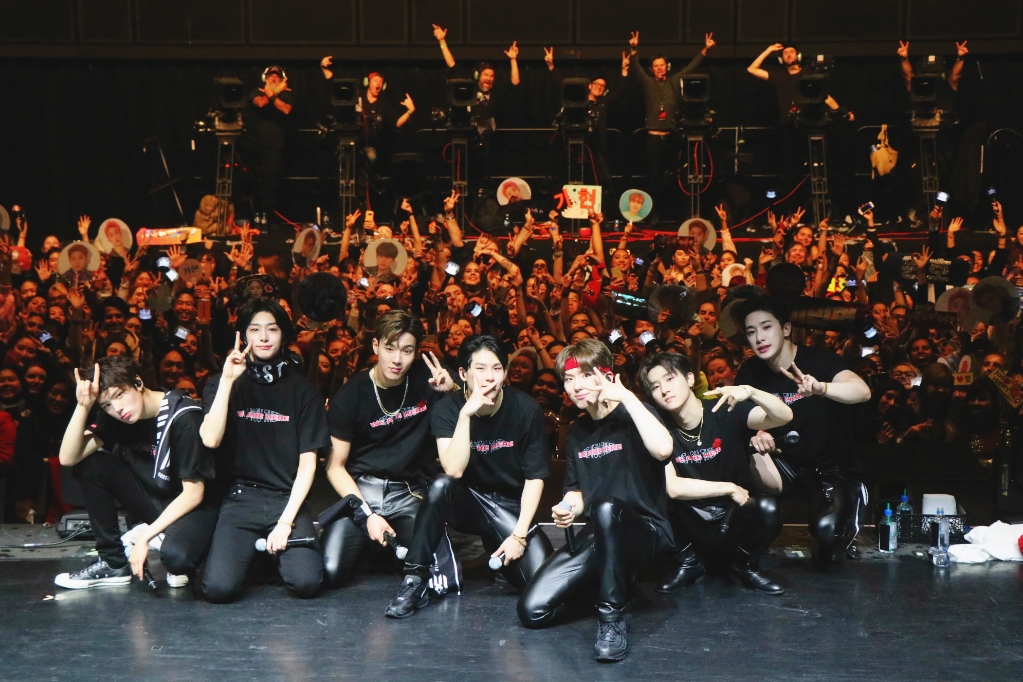 “Can we make a guarantee to you guys that we’ll be back next year? Should we make a promise now?” I.M. asked. On that note, we have high expectations for the 2020 return of MONSTA X.

As the goodbyes rolled out, suddenly a two and a half hour concert didn’t feel like enough.

“There are many beautiful things in Australia, but to us, you guys are the most beautiful thing. If anyone asks me what is the best part, I will say you and that answer will never change,” Kihyun said.

Joohoney followed up by saying, “the love between Monbebe and MONSTA X is a relationship with no hurries and no worries.”

“We will come next time, so will you come to our concert next time?” Hyungwon asked. 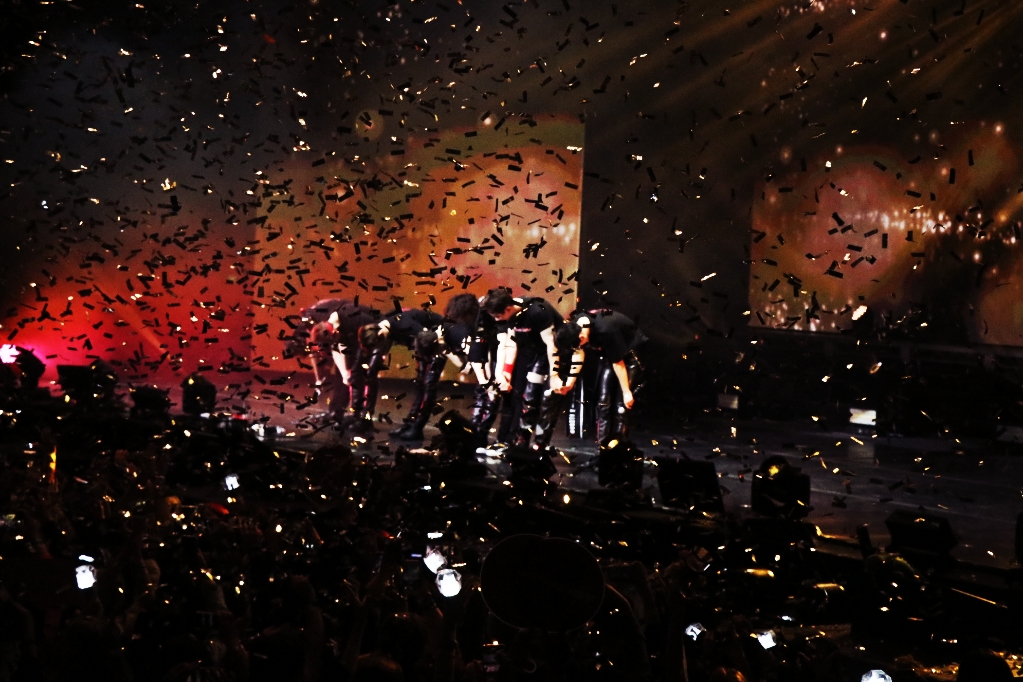 The boys launched into their final songs with ‘Rodeo‘, a song perfectly suited to the club vibes. They ended the evening with ‘By My Side‘, waving goodbyes to the fans and blowing kisses, hands interlocked.기현

Oh, and Wonho also took off his shirt and one lucky fan got to keep that sweat filled shirt. Let the jealousy ensue.

2019 MONSTA X ‘We Are Here’ World Tour in Sydney was brought to you by Starship Entertainment, CJ E&M, Frontier Touring, The event was held in Sydney, Australia, at the ICC Sydney Theatre.

Scroll for more
Tap
K-EXCLUSIVE: BLACKPINK made Berlin go crazy pink
K-EXCLUSIVE: 6 moments when MONSTA X left us shook at their ‘We Are Here’ tour in Melbourne!
Scroll
Loading Comments...