K-EXCLUSIVE: SHINee Woos Fans in Chicago During Their Fan Meet

K-EXCLUSIVE: SHINee Woos Fans in Chicago During Their Fan Meet

It seems that SHINee was on a nonstop roll this past weekend. With back-to-back concerts at Hallyu North Friday, May 6th and Korea Times Music Festival Saturday, May 7th, one would think they would be tired by their ‘2016 SHINee Fanmeet in Chicago’ on Sunday, May 8th. Even if they were, no one in the audience was able to tell since they emitted nothing but excitement and eagerness to get to know their international fans. 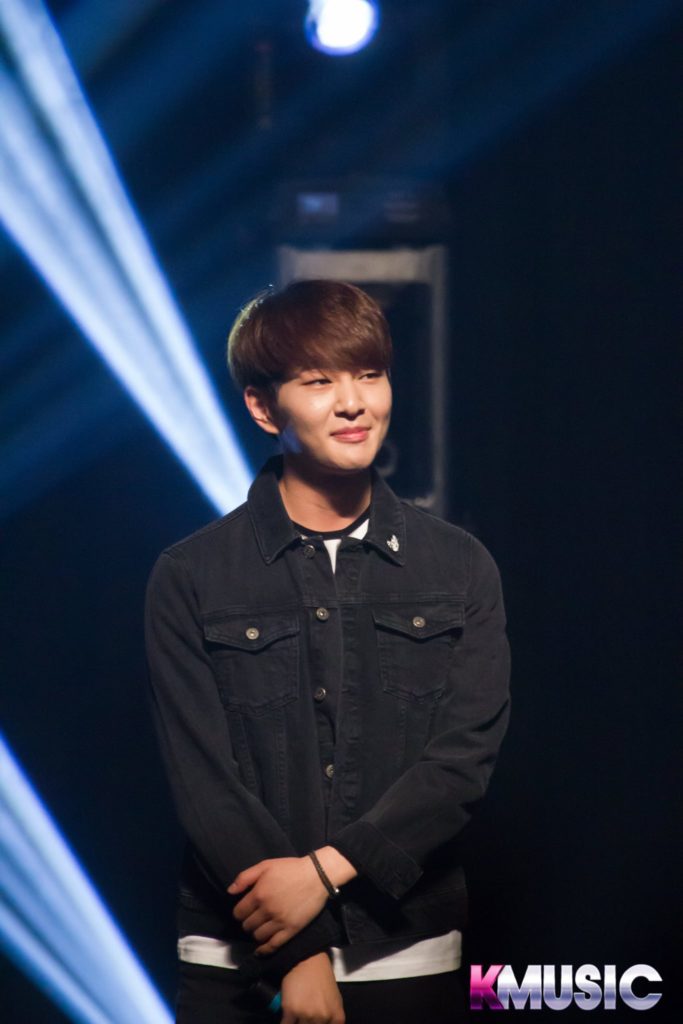 As the crowd poured into the venue, Shawols filled up the dark hall with their turquoise light sticks and balloons, amplifying the excitement. Fans traveled from as far and as wide as China and Thailand to see the five-membered group who debuted in 2008. May 25th marks their eight year anniversary on SBS’s Inkigayo with their hit single, ‘Replay.’ Although it was still a bit early, the fans did not let that deter them from celebrating it with the boys.

As the lights dimmed in the 4,400 capacity venue, fans’ screams for the boys increased while they jumped to their feet as the opening VCR played. The intro to ‘Everybody’ kicked in and the night started with a bang. Fans cheered to the hard-hitting song with their turquoise balloons and light sticks.

As the song ended, SHINee retreated from the stage and the MC, Martin E. Kim of Shine Entertainment, appeared from the side of the stage. Shortly after, the members—Key, Jonghyun, Onew, Minho, and Taemin—reappeared on the stage. Each of the members took the time to introduce themselves in English and then proceeded to watch the heartfelt video from fans all over that SubKulture Entertainment put together for them.

The members were touched and graciously thanked their fans for their affection and support over the years, expressing how blessed they felt to have such supportive and loving fans.

After that, the lights dimmed again and the boys performed ‘Hello.’ 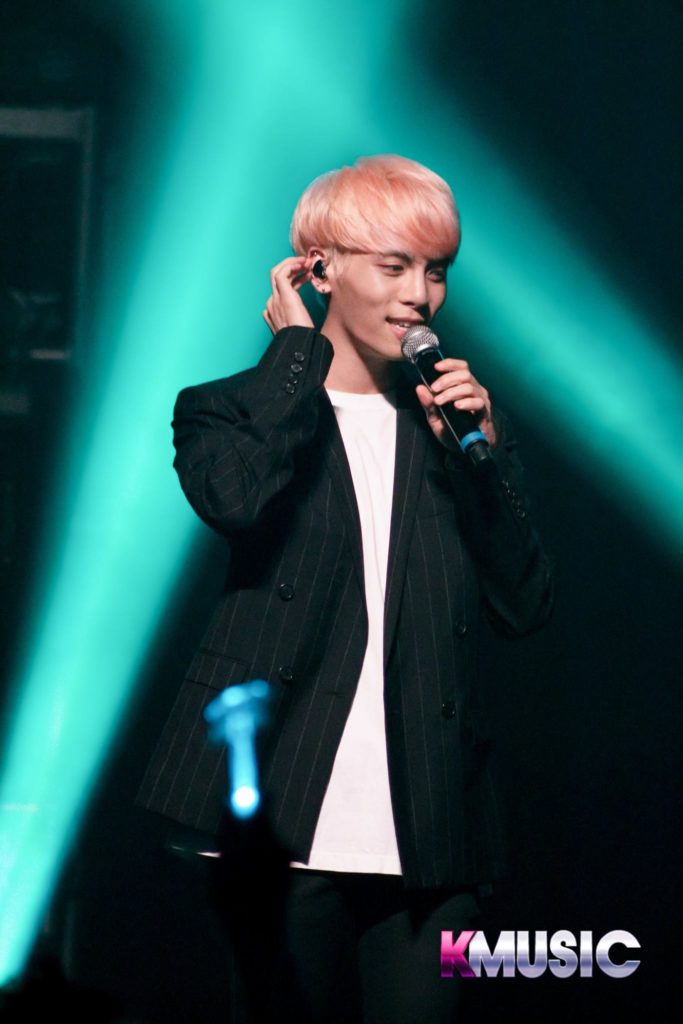 Chairs were brought out as the boys settled down, and Onew stated how the fans were SO amazingly loud that they couldn’t even hear themselves sing! Jonghyun also mentioned how surprised they were that the fans were able to sing along with them so loudly! The fan meet proceeded into a Q & A session with questions from fans that the promoters had collected into a jar to be picked at random. The questions and answers are as follows:

To Onew, what was the best part about filming your recent drama ‘Descendants of The Sun?’
Onew: Obviously I was always really curious to see how our fans would perceive me as I think this was our first time acting on TV. But as I was doing it, you guys continued to show us love and support, and you guys were a big strength to me, and hopefully I’ll be able to come back and say hello to you guys through another project.

Minho, which American actors are you interested in working with?
Minho: That’s a very awesome and refreshing question. In English: My favorite actor is Brad Pitt. Back to Korean: If I was able to, it would truly be an honor to be able to work with Brad Pitt.
MC: But honestly, they call Brad Pitt the U.S. Hollywood sex icon right? Who’s better looking? Minho or Brad Pitt?
*Fans scream ‘Minho’ as he becomes shy—shaking his head as he hides behind the X formed by his arms to show his disagreement*
Minho: Thank you everyone! *Bows to fans in gratitude as a huge grin developed on his face*

To Jonghyun, which member of SHINee would you want to have a subunit with?
Jonghyun: That’s one of the toughest questions of my entire life. Ummm.. Let’s see. Ah! I know! Taemin and Key. I do stuff with Onew often. Minho would be acting too much next to me, and that’s why I wouldn’t be able to work with Minho. He would always be doing performances next to me, and I don’t know if I could deal with that. 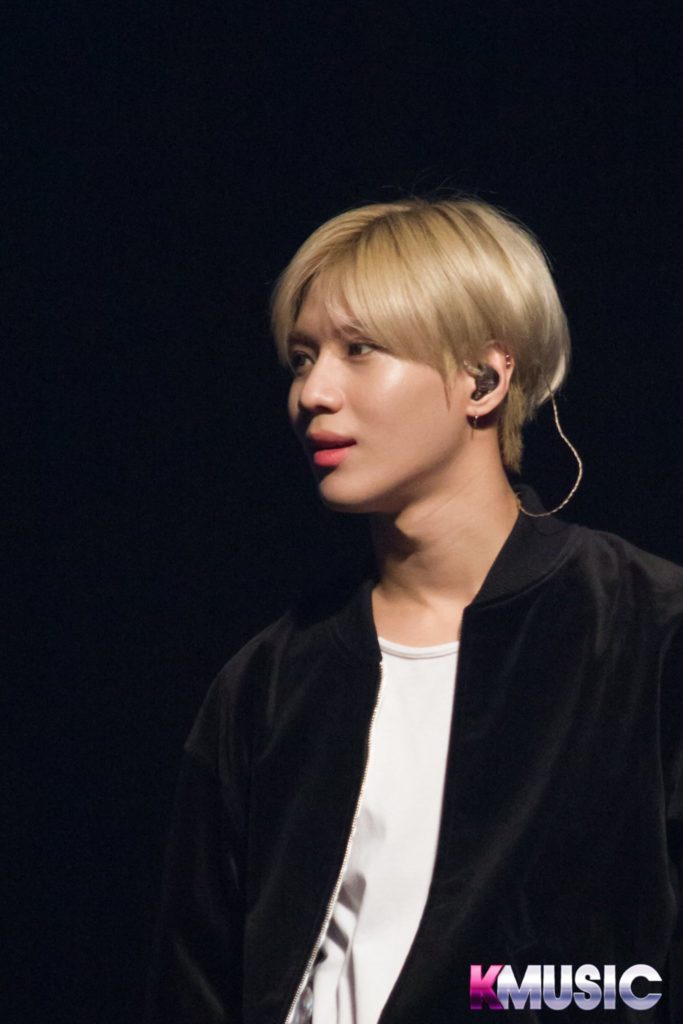 To Key, your skin always looks so perfect. So amazing! Could you please share your skin care secrets with us?
Key: In English: You guys already know we’re shooting cosmetics CF’s right? Use that one.

What are your most memorable moments from your rookie days?
Jonghyun: For me it was the very first time we took the stage—our first debut stage. As we were performing, I could see tears in all of our members’ eyes and it was definitely a very touching and memorable moment.
Key: In English: No that’s not, only you cried.
Minho: Only Jonghyun.
Onew: Liar.
Jonghyun: I swear I saw Key cry as well.
Key: In English: I know I cry a lot, but I didn’t cry back then.

Taemin: We first started off with all five of us living in one room. We argued and fought a lot during those days. We had no personal space. Think about it five guys in one bedroom. We would start really annoying each other saying stuff like don’t put your clothes here, don’t lie down there, and your cell phone alarms are going off all the time please shut it off. I remember those days.
MC: You guys aren’t still living together right?
Taemin: We live separately now.

If you had to pick an English name, what would you pick?
Jonghyun: Do the English speaking fans have a name they call me?
Fans: Sexy.
Key: Sexy?
*Jonghyun gestures to fans ‘who?’ to figure out who they’re talking about*
Minho: It’s Sexy Kim.
*fans cheer*
Jonghyun: Why? No, I hate that.
Key: In English: Well obviously that question is not for me right?
MC: But it’s not sexy as s-e-x-y, it’s sexee with s-e-x-e-e. So it’s sexsee. That’s what it is.
Key: My name is already in English. So, the question is not for me. Minho, you got an English name?
Minho: Uhh…..
Key: Brad.
*Minho smiles shyly*
Onew: Onew is already an English name.
Key: Oh New
Taemin: I actually have a Catholic name, and it’s Francis—Francisco. Obviously you guys all knew that already. 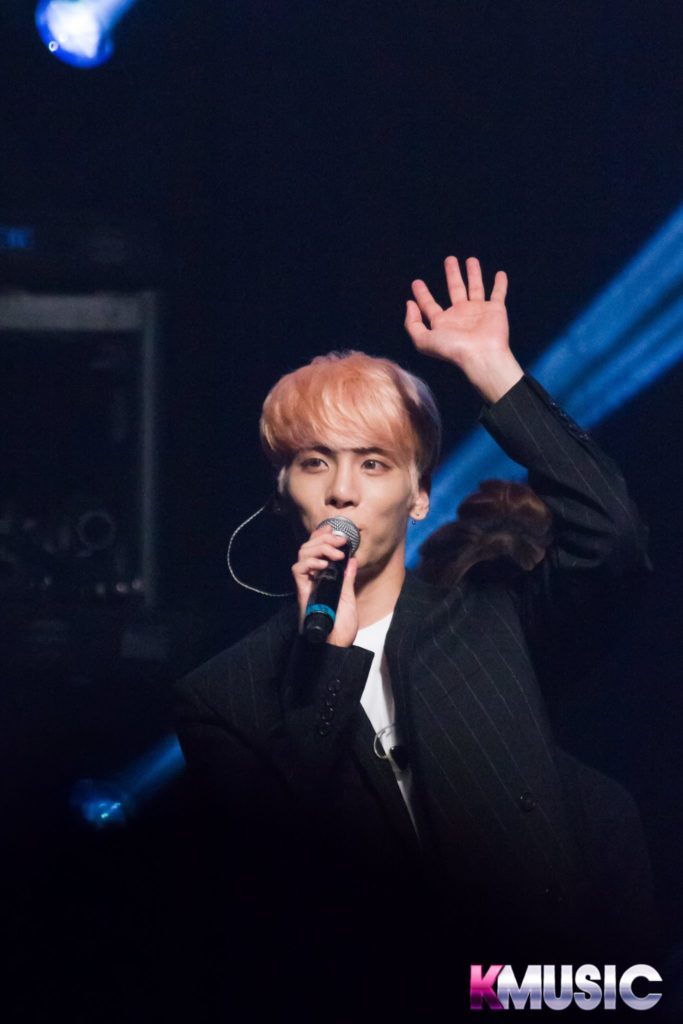 As the Q&A session ended, the MC revealed that a special event was planned for the next activity. Twenty lucky fans—including two that were 70 and 72 years old—were randomly selected to join SHINee on stage for a game of charades. Fans went wild as he revealed that the winning fans will each win an exclusive SHINee merchandise package, but the losing SHINee member would have to do a punishment.

The highly competitive game had members trying to distract the fans as the game proceeded, and one fan even argued with the MC stating she got one of them correct as he disagreed, which led to the MC jokingly asking for security. In the end, Taemin’s team won with a score of twelve to nine.

As the MC revealed that the losing members needed to do some power aegyo, the rest of the members sat down on the edge of the stage to watch with the fans. The anticipation in the venue was high with Key even mentioning how he, “cannot wait to see this.” Jonghyun suggested for them to act out a scenario of boyfriend trying to calm their angry girlfriend.

Onew tried to act it out alone leading Key and other members to comment that it wasn’t aegyo. When Minho’s turn came, he recruited Onew to act as his gangster girlfriend. Minho tried throwing hearts and even attempted to kiss ‘her’ in order to coax her from staying mad. As they finished, the MC asked the other members if it was okay, and Key replied, “Sorry, I expected tooooo much,” which evoked laughter from the excited crowd. 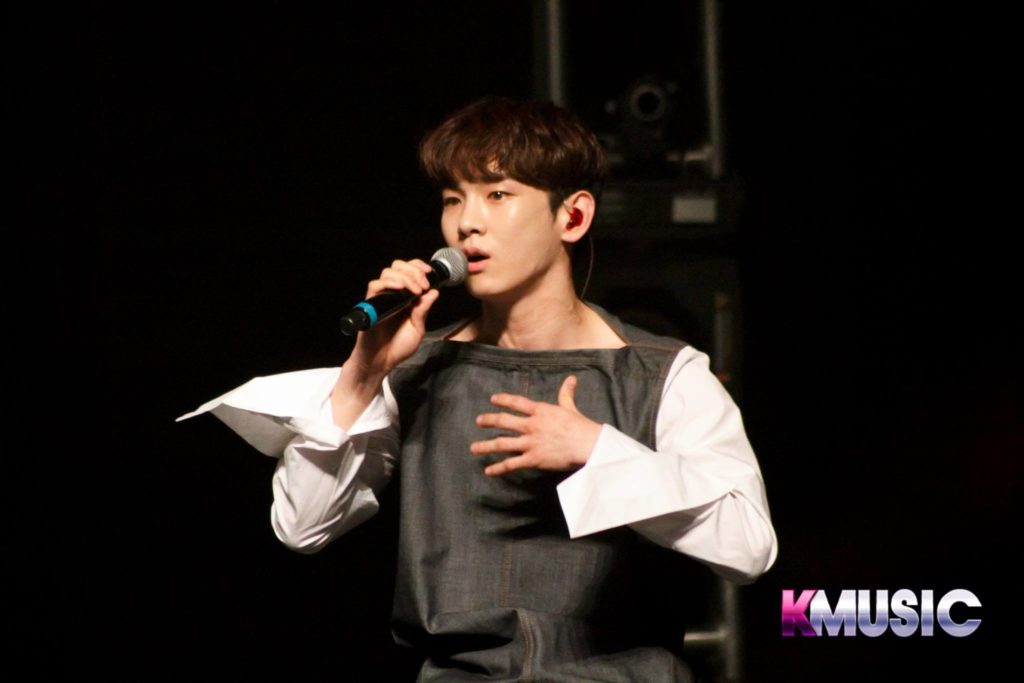 Another VCR came on, SHINee changed their costumes, and came back to perform ‘Replay’, ‘Lucifer’, and ‘Sherlock.’ After two more VCR videos, fans were graced with one last performance from the group –  ‘View.’

As the boys finished their performance and started their ending talk, fans all lifted up their banners—that were passed out as part of a fan project—in celebration of the group’s upcoming eight year anniversary. The group expressed their gratitude and amazement as this was their first solo event in the U.S. and did not expect it.

Key mentioned that they will definitely come back again and that Jonghyun is currently preparing for his solo album. He also mentioned how each of the members are all preparing for various upcoming works and to highly anticipate them.

Minho proceeds to thank fans once again—stating that he loves them dearly and that Shawols are very special to him. 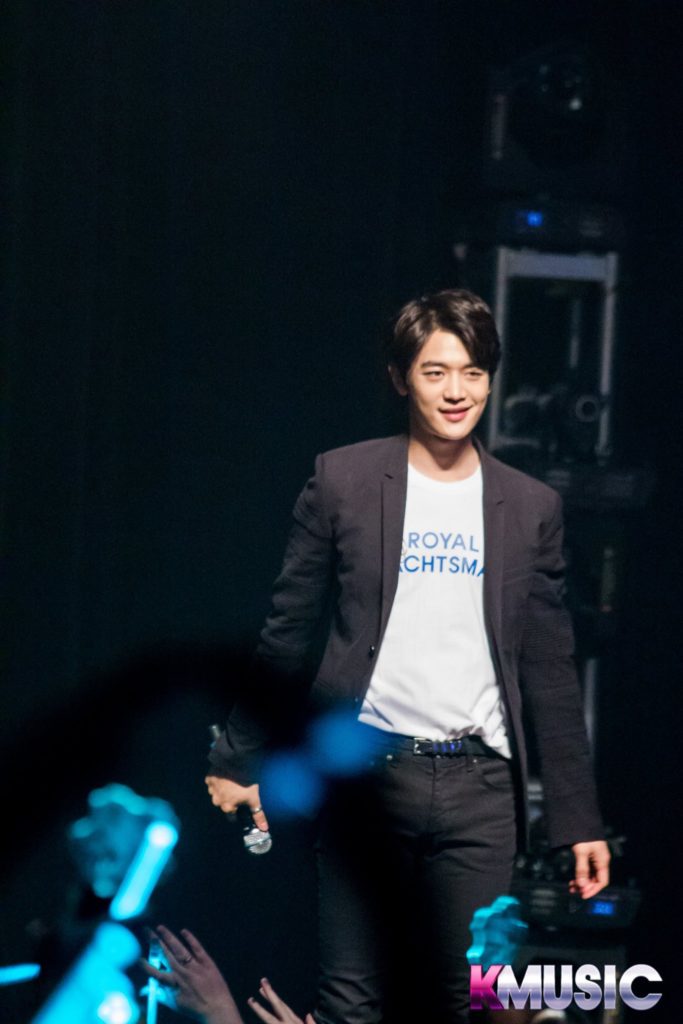 Afterwards, the members took pictures with the fans from the stage. Each of the members took time to say thank you’s and goodbye’s to each section. Minho continuously threw hearts to the fans while screaming, “LOVE YOU GUYS!” Key showed his unwillingness to leave the fans as he was the last to leave the stage. “I don’t want to say goodbye to you, but I know I have to go. I love you! Thanks for coming! We’ll come back. We’ll come back for sure! Wait for us! Thank you!” Key promised as he stepped off the stage one last time.

This was surely a night to remember for both the fans and the members of SHINee. Their performances were flawless and left everyone breathless. Their funny antics and vibrant personalities shone as they interacted with the fans. The hour and half fan meet was definitely not enough, but as Key promised, they will be back. I will definitely be waiting for them too, will you?

For more photos from the fanmeet check out our Facebook album HERE.

Officially KMusic would like to thank SM Entertainment, SHINee, and SubKulture Entertainment for this opportunity.

Stay tuned to Officially KMusic for more photos from this show and coverage on other upcoming tours and events along with the most recent news and updates!