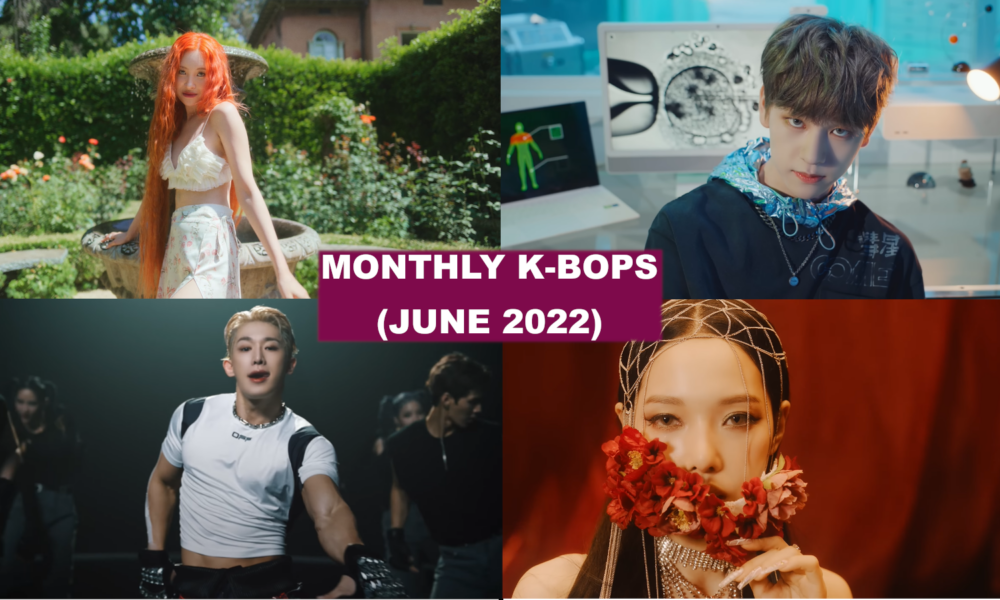 Can’t believe we’re already half way through the year, but as another month passes, we’ve picked our favourite K-Pop releases from that time. Will yours be down below? Keep reading to find out!

Although Sunmi’s latest release isn’t as high energy as her last few comebacks, Heart Burn brings a little more of Sunmi’s real self to the forefront. I’ve found myself lost in a trance to this song since my first listen, her voice is just mesmerising and the performance just seems effortless. Heart Burn visualises Sunmi as a black widow, her face kissed with freckles. The cinematic MV for this song features various romance tropes that lace the history of film, which is a beautiful roller coaster in itself. The most mesmerising K-Pop song of 2022 so far.

The title of the song pretty much summarizes the whole song – it will make you go crazy. The groovy melody gets your heart beating from the start. It reminds us of those OSTs for car racing video games whose purpose is to keep you in the rush of adrenaline. And that Wonho does marvelously throughout this song. The quitar layers the melody with an upbeat strength and dynamic. The chorus is refreshingly new, stepping aside from those instantly-addicting lyrics. We are adding this to our workout playlist! By the way, it has been recently announced that Wonho is coming to Europe, so we shall hope for this song to be performed as well!

KARD has returned with their first full group release in 22 months (befittingly on June 22), following J. Seph’s discharge from mandatory military service. Their fifth EP, RE:, includes four new songs (my favourites of which are Good Love and Whip!) and a music video for Ring The Alarm.

When the Woolim Entertainment group returned, they took on a darker sound than they’ve ever done before. At first I was a little worried but the rock bolstered sound mixed with electronic elements make the track stand out. Along with a story driven music video, the confidence they have with this charismatic style truly showed.

Vocals take centre stage for the chorus with the synchronized sung title of the track engrained into my head due to its hypnotizing impact. Its anthemic quality stands well against its aforentioned powerful instrumental.