In the virtual gaming world, Kwon Yoo (Ji Chang Wook) is, for lack of better words, a badass. He’s one of the greatest leaders who looks out for every member of his team even if it kills him. In real life, Kwon Yoo is an unemployed ex-taekwondo medalist. One morning he’s woken up by a team of police officers arresting him for a murder he didn’t commit. With the help of an unlikely friend and his team of technology-skilled hackers, Kwon Yoo uncovers the truth of the murder case. 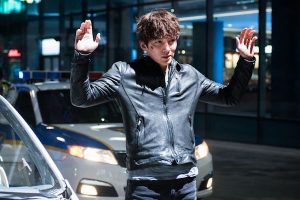 This movie is one of the greatest movies I’ve ever seen! I have a deep-set love for Ji Chang Wook and he is anything but a disappointment with this film. As his first time on the Korean big screen, Chang Wook is clearly in his element with action packed stunts that keep viewers on the edge of their seats. While the beginning of the movie is upsetting albeit quite disturbing (but what prison movie isn’t), the strength that one man has to clear his name is incredible. The cinematography is also amazing, the use of the camera and bringing a virtual world to life is truly a masterpiece. This was the first Korean movie I had the pleasure of seeing in an actual movie theater and it is most definitely worth looking into local cinemas with foreign films. There is absolutely no doubt I will watch this movie again, in fact I’ve recommended it to every friend I know!

It’s an 11/10 from me, this is a movie that I would tell everyone to watch, my jaw is still dropped 3 days later at the complete amazement of the film!

What did you think of the film if you’ve seen it? Or would you see it if you haven’t already? Let us know in the comments below!

For all the latest in Korean entertainment follow Officially KMusic!