PSY has a faceoff in his ‘That That (prod. & feat. SUGA of BTS)’ comeback MV! 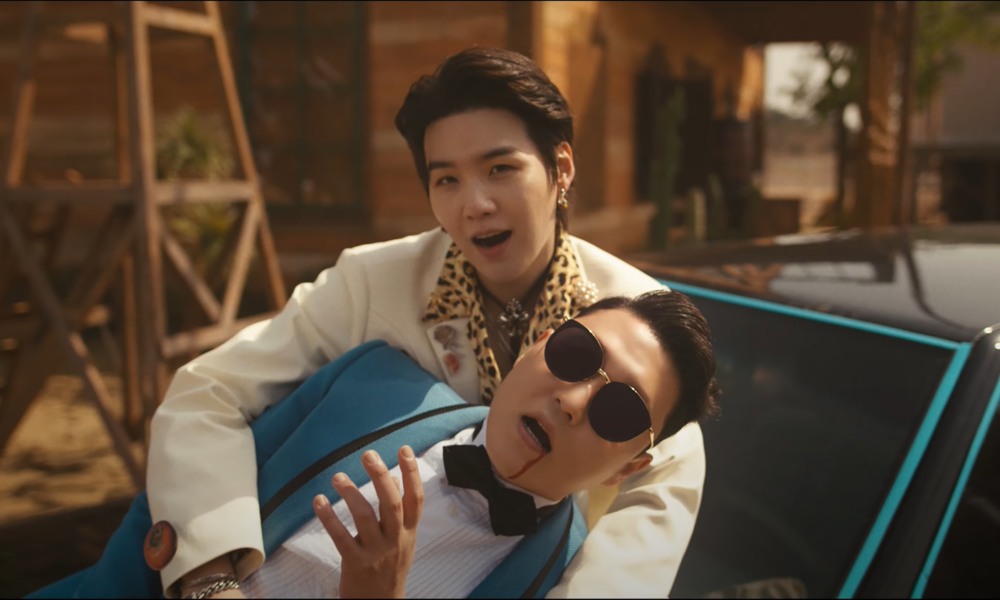 PSY has a faceoff in his ‘That That (prod. & feat. SUGA of BTS)’ comeback MV!

On April 29th, PSY released the music video to his new title track, ‘That That’. Along with this single, he also simultaneously dropped his 9th full album, ‘Psy’s 9th’. Featuring many collaborations with the likes of R&B singer Heize, Epik High‘s Tablo, and MAMAMOO‘s Hwasa, the loaded album will also spawn various singles off it.

The title track features the signature catchiness and fun all-round sound known from the artist. As if the star-power was not enough alone, the song features and was produced by BTS‘s Suga. Its MV is set in an old western town. Emerging from the saloon doors, he comically announces his 2022 comeback. Around halfway through Suga himself enters the town, leading to a faceoff. As the town splits sides, it seems PSY dies via slapping. With blood running down his lips however, the two quickly make up and dance to the point choreography of the track.

This marks the veteran’s comeback in 5 years and following his string of door-opening hits like ‘Gangnam Style’, ‘Gentleman’ and ‘I Luv It’. Anticipation was well high ahead of his return. In the past 5 years, he’s notably founded his own agency, P Nation; going to sign famed artists such as Hyuna, Crush and Jessi just to name a few.

Based on his YouTube channel, we’ll be getting official music videos for ‘Happier feat. Crush’, ‘Everyday’, and ‘Celeb’ featuring Suzy in the music video, all off the album.

How do you feel about the surprise collaboration and return? Let us know in the comments below!

Scroll for more
Tap
YOUNITE request you to choose ‘1 of 9’ in their group debut MV!
iKON glitter and flash in their long awaited ‘But You’ comeback MV!
Scroll