Just two weeks after releasing the official music video for ‘Shangri-La‘, VIXX have released a dance practice version that will have k-pop dance cover groups everywhere stocking up on fans! No longer just props, the fans seem to take on a mesmerising life of their own in this version, flickering in and out of the choreography, as they’re expertly handed by members N, Leo, Ken, Ravi, Hongbin and Hyuk. 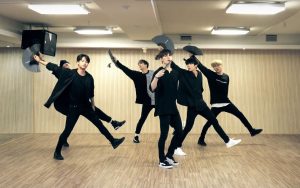 If your timeline hasn’t been blessed with this video yet, check it below now!

Scroll for more
Tap
24K Says They Love ‘Only You’ In Their Latest Music Video
iKON’s ‘BLING BLING’ dance practice is out, and you SHOULD believe the hype
Scroll