Check out the star-studded cast of upcoming variety show ‘Dunia’

Check out the star-studded cast of upcoming variety show ‘Dunia’

The cast of ‘Dunia: Into the New World’ has been announced, alongside an exciting animated poster of the cast!

The exciting show is set to be unlike anything we’ve seen on TV before; it will follow the ten cast members on a journey of survival after being stranded in a land known as ‘Dunia.’ The concept of the show explains that a dramatic story will unfold as the characters try to survive.

Interestingly, there will not be an MC, instead, the show will rely on the talents and stories of the ten cast members. Check out the animated teaser poster for the show below, which features Yunho with a map as the focal point in the middle.

“DUNIA: INTO THE NEW WORLD” POSTER 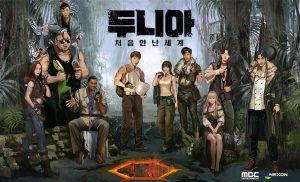 The show is a collaboration between network MBC and mobile game ‘Durango’ – we can’t wait to see how it will play out! In the meantime, check out a trailer for the mobile game below, that may give some indication of how the show will run!

‘Dunia: Into the Real World’ will air on MBC following the conclusion of the current show ‘Wizard of Nowhere’ – be sure to mark your calendars!