B.A.P is definitely doing it big with their comeback!

The boy group recently released their sixth single album, ‘ROSE‘ on March 7th, and since then has entered the ‘Worldwide iTunes album chart!’ This ranking was based on the ranking of online music sales worldwide. 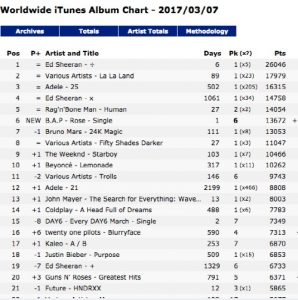 BAP entered the charts along with big names in music like Ed Sheeran, Bruno Mars and Beyonce. They took second place on the charts in Russia, Finland, Norway and Thailand at the same time as their new single release. The group has also achieved high scores in both Asia and Europe charts in Greece, Hungary and Singapore.

This isn’t the first time the 6 member powerhouse has topped worldwide charts. The group’s album ‘Noir‘ which was released in November last year had entered the 12th place on the world wide iTunes album chart. In addition, the album took the #1 spot on the Billboard’s World Album Chart within it’s first month of release.

Congrats to B.A.P for continuously slaying the charts!