B1A4 have become the national idol group of Pyeong Chang for the 2018 Olympics!

The boy group whas excited about the performance saying, “It’s a huge honor to be invited to this ceremony. We were touched enough. We look forward to the gold medals of our national team.” The boys joked around back stage, each one attempting a different sport for the Olympics before going on stage. They also sang the song, ‘We are the Champions‘ before gracing the stage for rehearsal. Cnu sweetly stated “I still feel like I’m dreaming. It’s an honor to perform at this meaningful event.”

Leader Jinyoung, had a few words about his parents saying “My parents were very proud of me. They cheered me up a lot. I’ll do my best!” Rapper Baro excitedly cheered on, “I wish a good luck for a successful PyeongChang Olympics. Will we be able to perform again next year? Well, I’m very proud to be in this event.” 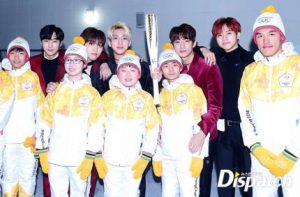 The boys performed ‘Beautiful‘ on the big stage and stood with the national children’s choir. It was surely a big day for such a talented group!

Are you excited to see B1A4 perform for the Olympics? Let us know in the comments below