BTS slayed at the American Music Awards – and here’s a wrap up of the night!

BTS slayed at the American Music Awards – and here’s a wrap up of the night!

It has been an exciting day for not only ARMYs, but for K-pop fans around the world, as BTS made their much anticipated US television debut at the American Music Awards.

In the lead-up to the performance, BTS had their very own Snapchat story, where they greeted fans and practiced for their performance of ‘DNA’ check it out!

Fast forward a couple of hours, and the seven-member group turned up on the red carpet looking like this: 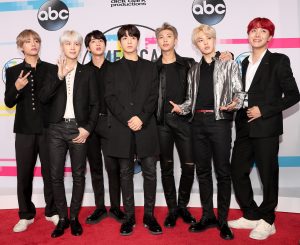 Later, at the awards show,  our first glimpse of BTS is when they can be seen rocking out to Demi Lovato’s performance of ‘Sorry Not Sorry.’

BTS ARE SO FUNNY LOOK AT THEM pic.twitter.com/3GAF5fcUm3

Finally, our boys performed their amazing and passionate rendition of ‘DNA’ – the dancing and vocals were on point, and everyone in the audience was dancing. Listen below, as you hear fan chants, and witness ARMYs crying while holding up Army Bombs! You can even see celebrities such as Baby Driver’s Ansel Elgort getting excited and filming BTS during the performance.

BTS AFTER THE AMAS

.@BTS_twt dish on their show-stopping performance at the 2017 #AMAs: "It was a dream!" https://t.co/iKRguSCuZN pic.twitter.com/WUkrgMVGoO

It’s been a crazy night for BTS and fans everywhere. We’ll leave you with a photo of BTS and one half of The Chainsmokers, Alex, as you fangirl over the past 24 hours! 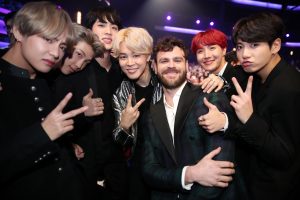 Congratulations to Jungkook, RM, Suga, V, Jin, Jimin and J-hope for absolutely slaying their performance of ‘DNA‘! Make sure to stay tuned to Officially Kmusic for all the latest K-pop music news.