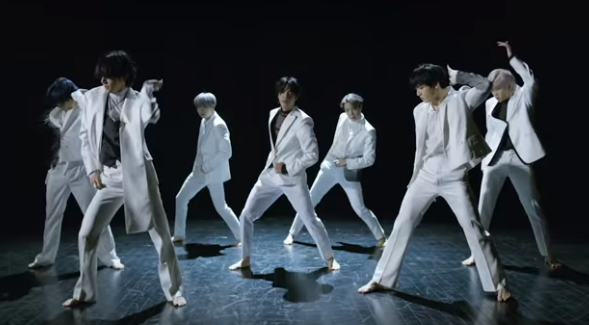 On March 4th, BTS released their latest music video of ‘Black Swan’. Check it out below:

The MV itself is very dark, with the members lingering in an old-looking theatre as though remembering and looking upon a past time in which they were famous. It can almost be said to look like a haunted memory, and leaves the members bare, and exposes their worries for the future.

Jimin is able to show off his impressive dance ability during the MV and, through clever editing, the MV transitions smoothly from one member to the next, and through the group as a whole.

Shadows feature as various points, perhaps relating back to ‘INTERLUDE : SHADOW’. These shadows seem to have minds of their own, following the members, as though they are their past demons come to haunt them once more, or as manifestations of worries. They are positioned thoughtfully throughout various scenes, with one behind SUGA on the stage, and another hidden from RM’s sight above him.

The members wear both white and black outfits, somewhat similar to version one and version two of the newly released album ‘MAP OF THE SOUL : 7’. And, as always, their choreography is on point.

What do you think about the new ‘Black swan’ MV? Let us know in the comments below.