It’s already time for the third part of this review so, let’s finally get to reviewing the last of the solo tracks and the unit tracks! 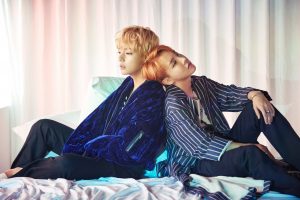 Concluding the solo tracks section of the album is BTS’s oldest hyung, Jin, and his self-composed track. This is the first song Jin has had a large role on, both with lyrical composition and vocals and he definitely surpassed my expectations.

This song had me on the verge of tears and when he hit his highest note with “I can’t touch the sky”, there was no stopping them. This is just a very sad- maybe the saddest song- on the album and personally, I think it was perfect for Jin and the mellow quality of his vocals. The violin in the background was key in upping the emotional factor in this track and complimented his vocals in the best way. He did say hitting the high notes was challenging, but I think he really outdid himself. If anything, this track proves what Army’s have been saying forever- to give him more lines in songs. So Big Hit, please let Jin fly and touch the sky that he wants so much because we want it too.

As is tradition with BTS albums, the vocal line gets a chance to show off their skills alone. This time, they’re back with ‘Lost‘ and lyrics written by Rap Monster.

The feeling I got from this track reminded me a lot of older BTS songs. And although it wasn’t an immediate pick of mine, it definitely caught on after three or four repeats. It’s a little R&B and my favorite part is the way each of the vocals switches between “Lost my way” and “Found my way” in the chorus. Smooth instrumentals and smooth vocals make for a track that works its way up your favorites list quite quickly.

I don’t think there was a soul in this world more excited than V when the rap line announced the next installment to their cypher- except maybe me. In contrast to the vocal line and their lyrics about finding their way, the rap line came forward to shut down the haters.

Trap rap is probably my favorite type and there are only a few rappers who’ve managed to impress me with their skills. I expected J-Hope to be the one to stand out to me the most with this genre of rap and I think he did a good job- just not enough to surpass my (super high) expectations.

Rap Monster’s verse was definitely my favorite because of the sarcastic way he used the term “bae” at the end of every statement and the way he was completely unapologetic for being his best self.

And lastly, Suga came in to finish this cypher by spitting fire as he usually does. His ending of ‘Cypher part 3‘ was the reason I had that track on repeat for weeks and he’s done it again with part 4. If there is another idol rapper with more passion than Agust D, I’d like to see it.

This is the song that inspired the title for this part of the review. Why? Two words: New Orleans. With its quick tempo and jazz elements in the intro, I was definitely drawn in and taken to one of my favorite cities in the world.

However, despite it’s fun instrumental, it carries a very important message like all of their songs. BTS described this track as a follow up from ‘Baepsae,’ and even without them saying that I would have reached that conclusion. There was one verse that really caught my attention on this track:

After that verse, I don’t think there’s any more I can say about how relevant this track is to our generation.

I find it hard to conclude this part after ‘Am I Wrong’ and its sentiments. So I’m just going to say, click here for the final part of this very long review where I will give my two-cents on the three remaining tracks and tie this all up with a nice bow. Check out my first two BTS ‘WINGS’ reviews W and I.