Get to know the talented Eric Nam who will be touring Australia in March! Get to know the talented Eric Nam who will be touring Australia in March!

Eric Nam will be touring Australia in March! Stopping at a total of three cities, Brisbane, Sydney and Melbourne, now would be the perfect time to find out about him personally!

If you haven’t already heard of Eric Nam, maybe you’ll recognise him as the “Your dog speaks Chinese?!” guy in the viral meme, but first, let’s start with the basics.

Born on the 17th of November 1988 in Atlanta, Eric Nam or Nam Yoondo will be turning 31 this year. He is currently under Stone Music Entertainment. Eric also has two younger brothers who you may have seen in pictures and broadcasts!

Having his own Youtube channel, Eric‘s singing attracted attention from Korea. He graduated both high school and college and had a job in finance before he decided to pursue a career in music. Eric is able to speak English and Korean fluently, learnt Spanish whilst volunteering and is also conversational in Mandarin through his time studying in China.

He started his unofficial career in Korea through a survival audition program named ‘Birth of A Great Star 2′.  Finishing the show with good results, he then released his debut track ‘Heaven’s Door‘ the following year in 2013.

Eric has released over 20 albums, including single albums, collaborations, OSTs and even pre-debut albums. Some notable ones include his debut album ‘Cloud 9‘, ‘Ooh Ooh‘, ‘DREAM‘ with 15&‘s Park Jimin, ‘Spring Love‘ with Red Velvet‘s Wendy, mini album ‘INTERVIEW‘, remake of famous OST ‘Perhaps Love‘ ‘Your BGM Vol. 1‘ with CHEEZE, ‘Honestly‘ and most recently ‘Miss You‘. 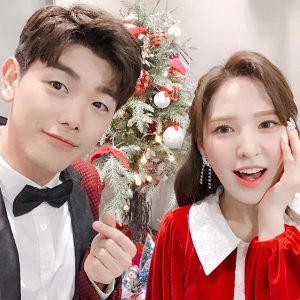 Check out this link to read in more detail about Eric Nam‘s music!

Possibly the most widely known program that Eric has hosted is ‘After School Club (ASC)’. As the main host of the show when it started airing in 2014, Eric is known by many international fans for his extremely witty and goofy time there. He later left the show in 2016 but has appeared as a guest time and time again.

Check out this funny clip when he did a ‘Hangout’ with his two brothers!

Whilst he showed off his goofy side on variety shows like ‘ASC’, ‘We Got Married’ with MAMAMOO‘s Solar, ‘YangNam Show’ he has also showed a more professional side with his work as an interviewer and reporter. Being fluent in English and Korean, Eric has interviewed many American stars including Robert Downey Jr., Miranda Kerr, Emma Watson and many more. Acting as the interviewer and at time translator in his career, Eric has proved his skills as a well-rounded entertainer.

Some of Eric‘s notable achievements include being listed as Forbes ’30 Under 30 Asia 2017′ and was picked by GQ Korea as ‘Men Of The Year’ in 2016. Another noteworthy moment was when he, alongside his two brothers, bought out one screening of the movie Crazy Rich Asians following it’s release. Eric showed that he is a strong advocate for Asian representation in Western movies, earning further respect from fans.

Don’t miss out his concerts when he tours in March. For more information click here. The dates and locations are as follows,

Brisbane on March 8th at The Triffid

We hope that you have officially become part of the NamNation after reading about this amazing man!

Scroll for more
Tap
Have a taste of what Eric Nam has to offer before his Australian tour!
Yiruma: A brief introduction to the talented pianist Yiruma
Scroll
Loading Comments...