TWICE Sends You A ‘Signal’ In Latest Music Video

TWICE Sends You A ‘Signal’ In Latest Music Video

TWICE is finally back with another oddly addicting track, ‘Signal‘. It is a track that is filled with unique groovy sound that fits nicely into their alien-themed concept. Check it out below!

‘Signal’ is a track that has an addictive chorus that is able to show off their great vocals. Their voices fits nicely into the hip hop sound. This track also has a quite distinctive beat that is quite catchy to listen to. The music video itself is quite cute to watch. It is nice to see their different super powers in which they try to use to on the alien. It is used so that they can get the alien to pay attention to them!

On top of that, it looks like there is another easy gesture and dancing point to pay attention to! It is the ‘Signal’ pose which fits well into the track. The girls have done it again! They are back with such a great track that has a different sound to what they have been revealing. Nevertheless it still fits them quite well and it was changed to fit them nicely. Meanwhile, their track has received an all-kill on all six real-time music charts. This includes Melon, Bugs and Genie! 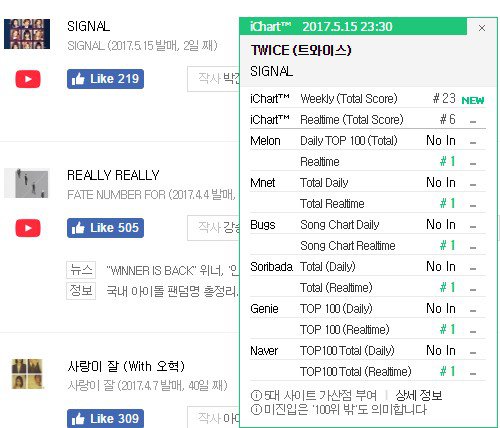 On top of that, their track is doing quite well on the international charts. This includes getting number one on the iTunes album chart in countries like Hong Kong, Singapore, Vietnam, Indonesia, Brunei and Panama. It has also ranked third place in Sweden, fourth place in Brazil, fifteenth place in Canada and seventeenth place in America.

Meanwhile, TWICE has dropped the trailer for their upcoming reality show, ‘TWICE TV5‘. It will consist of twenty-four episodes, in which they are filming in Switzerland. It will be filled with many great adventures where they will explore the cultures and beautiful iconic attractions in Switzerland. Check out the video below!

Congratulations to TWICE for their achievements! Continue to show your support for TWICE. Meanwhile, be sure to check out the music video for ‘Signal’ above! What did you think about this track? Let us know in the comments below!

Stay tuned as Officially Kmusic continue to keep you updated on Korean entertainment!