B.A.P To Make A Comeback With 6th Album ‘ROSE’

B.A.P To Make A Comeback With 6th Album ‘ROSE’

After a series of ambiguous teasers and trailers, it has been confirmed that B.A.P will be making a comeback! The boys will be releasing their 6th album titled, ‘ROSE.’

The group has since dropped the comeback schedule list, which can be viewed below: 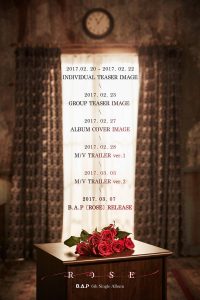