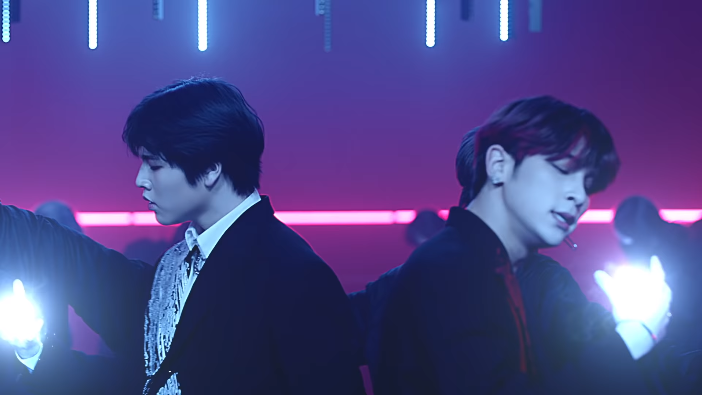 On April 21st, Lee Hangyul and Nam Dohyon (H&D), released their debut MV for ‘Soul’. Check it out below!

The song whilst having sparser verses, has an uptempo EDM instrumental with catchy hook in the chorus. The lyrics describe the electric feeling when two people want each other, being together in their souls.

Looking at the MV, it starts off with the duo waking up from a car crash, but we soon move on to the dance sequences to the track. Both members display their charismatic sides throughout their routine and expressions. The backup dancers add volume to the already powerful choreography. Furthermore, the sudden changes in lighting from light to dark create more visually captivating shots that show the intricacies of the dance. The MV ends with the duo running back to the scene of the car at the start.

The members of H&D both earned spots in Mnet‘s ‘Produce X 101′ group, X1, which disbanded in January 2020. This release marks their official debut as a duo following their pre-release singles, ‘Toward Tomorrow’ and ‘Unfamiliar’, the latter of which was released only three weeks ago.

‘Soul’ is one of the title tracks off their debut mini album, ‘Soulmate’, which contains a total of 10 tracks.

What did you think of H&D‘s ‘Soul’ MV? Let us know in the comments below!

Scroll for more
Tap
CRAVITY make their explosive debut with ‘Break All the Rules’ MV
MAMAMOO’s SOLAR debuts with a chic badass MV for ‘Spit It Out’!
Scroll