Fashion is the perfect way to show your unique traits to the world. People with good style pay attention to the color, cut, and fabric of their clothes. When it comes to fashion, K-pop idols are at the top. Among them,  EXO‘s Sehun is an expert who has endless options for fashion and tends to experiment to find out what clothes flatter his figure and express his unique personality. EXO member attended the Paris Fashion Week 2017 on the 7th of March and caught the eyes of all the top fashion figures. 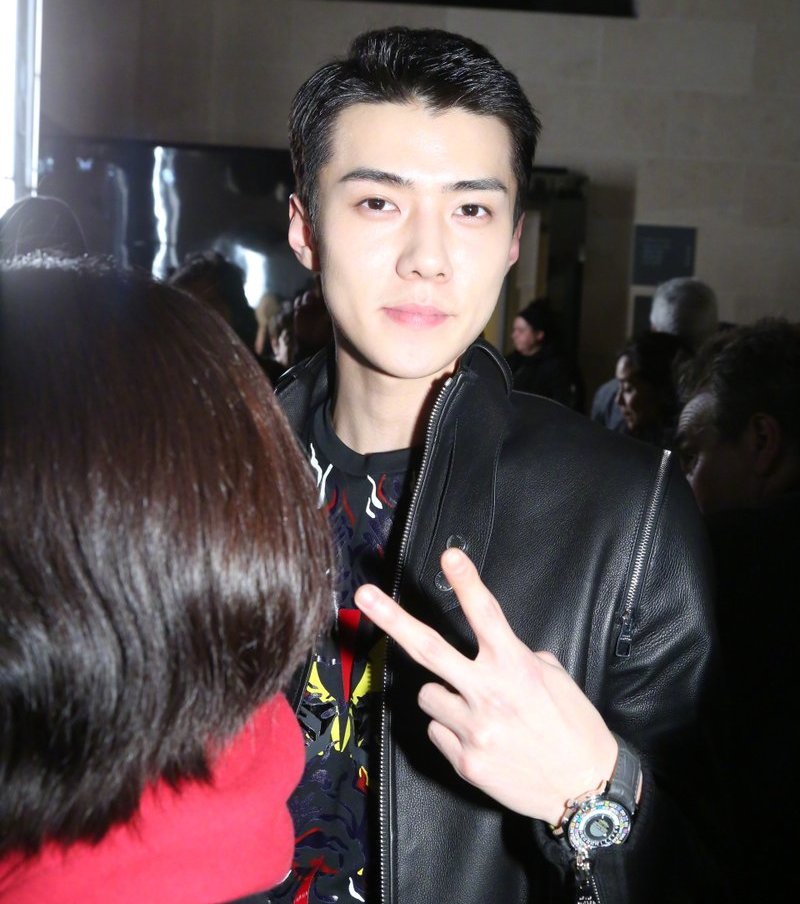 Few days ago, Sehun was seen with fellow EXO member Suho flying off to Paris. Idol star made his appearance at Louis Vuitton‘s latest Fall collection fashion show which took place at the Cour Marly in the Louvre Museum. He was seen wearing a black leather bomber jacket with a kaleidoscopic printed shirt and gray dress pants with his sleeked-back neat hair. Guess what? Sehun became the star of the night. What is more amazing is, world’s number one fashion magazine Vogue selected Oh Sehun as Louis Vuitton’s best dressed man at Paris fashion Week.

“There’s always plenty of competition in the front row at Louis Vuitton, but this season the man with the best look— and with the most screaming fans—was Sehun, the star of the Seoul-based musical group EXO.  As a member of arguably the world’s biggest boy band, Sehun is used to traveling the world while wearing arresting designer gear, but at Louis Vuitton he switched things up by going understated. Though he’s been known to waltz through airports in menswear looks direct from the runway and changing his hair color to rainbow shades, his Louis Vuitton moment was polished. With slick-backed locks, a colorful shirt in a kaleidoscopic print, and a black leather bomber, his vibe was simple, sexy and perfect for a trip to the Louvre to sit in the front row.”

According to Vogue, getting a seat in the front row at Louis Vuitton is very challenging. However, Sehun managed to get his front seat with his look and obviously with french EXO-Ls. As soon as Sehun arrived at the venue, all you could hear was loud fan chants who screamed his name ‘Oh Sehun! Oh Sehun!’. Along with that, Vogue also mentioned EXO as “arguably world’s biggest boy band”. Isn’t amazing to hear that EXO is getting recognized by the whole world?

Jaden Smith and Korean actress Bae Doona took this opportunity to take snapshots with the man of the night, Oh Sehun. Big names in the fashion world such as Léa Seydoux, Jennifer Connelly and Catherine Deneuve attended the show and “Sehun fit right in with the glamorous crowd and came complete with an army of acolytes.” Sehun also did not forget to update his Instagram account during the runway. Moreover, Thomas Ye who updated his Instagram with Sehun captioned,

“Met #sehun at the #louisvuitton show. Thousands of French teenage girls were screaming his name so loud that we could barely hear each other talking… #exo “

After Sehun left the event, the whole crowd was wondering, “Who’s that boy?”

Met #sehun at the #louisvuitton show. Thousands of French teenage girls were screaming his name so loud that we could barely hear each other talking… #exo #lvfw17 #pfw

Are you feeling proud of Sehun? Let us know your thoughts in the comments below.