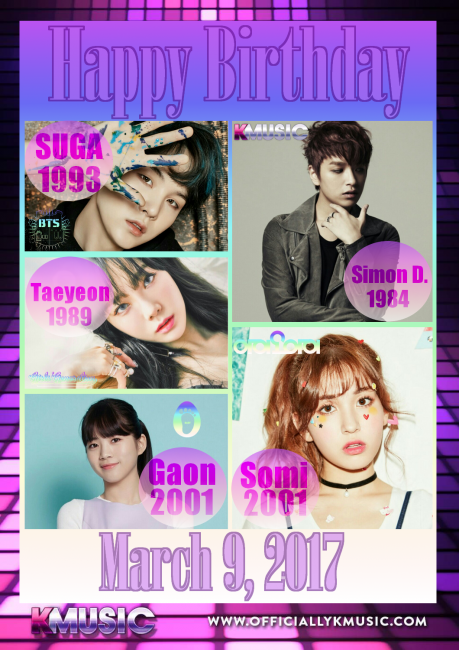 Position in the Group: Lead rapper, writer and producer

Things to know about Suga:

In August 2016 he released his mixtape Agust D under the name “Agust D”. He derived this name for the fact he released it in August and the D stands for Daegu, his hometown.

He is the second oldest member of BTS.

He is known for his love to sleep, eat, and his kind heart.

In their first year, BTS had a fan meet for 300+ fans on his birthday; each got a small gift from him with a special note that he wrote for each and everyone.

He has several nicknames: Suga, Min Suga, Genius Min Suga, Agust D, and Genius Suga are the most popular among fans.

He uses his satoori when he is nervous or upset.

He said he would date Jin if Jin was a girl.

He loves to take photos.

Position in the Group: Leader and main vocalist

Things to know about Taeyeon:

He has a brother and sister.

She was on We Got Married with Jung Hyung Don from Weekly Idol.

She is part of their subgroup TTS with Tiffany and Seohyun.

Position in the Group: Maknae, lead dancer, lead vocalist, rapper, and face of the group.

Things to know about Somi:

She was ranked number 1 in the first season of Produce 101.

She is a former JYPE trainee.

She will be featured in Eric Nam’s next collaboration, “You, Who?” which is actually coming out today.

Position in the Group: None

Things to know about Simon D:

He is the Co-CEO of AOMG

He used to be part of Supreme Team.

Position in the Group: Vocalist and dancer