BLK gets ready for debut by dropping debut schedule

BLK gets ready for debut by dropping debut schedule

BYKING Entertainment will be launching their new boy group this month! The group is called BLK, also was known as ACEMAX-BLACK. The group will make their debut in November with their first mini album, ‘Into BLK Part 1‘. To get fans excited for this debut, the boys have released their debut schedule! So, check that out below! 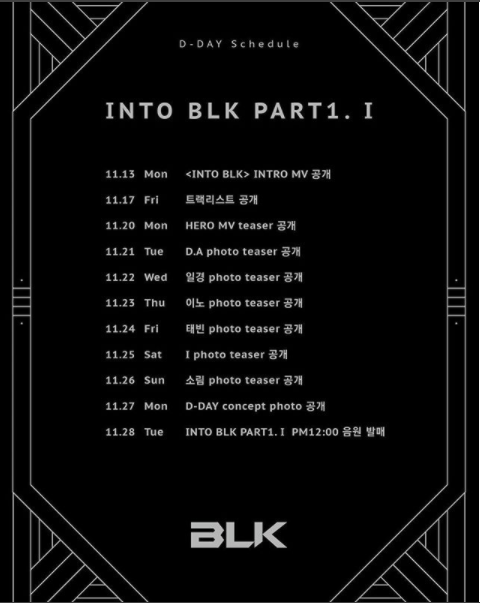 BLK will be dropping their intro MV on November 13th and a Hero MV teaser on November 20th. The boys will drop their individual photo teasers from November 21st to the 26th. They will also reveal their final concept photo on November 27th.

BLK is a six-member group, with the following members: D.A, Taebin, Ilkyung, Sorim, I and Ino. Each member is very talented as they are great at composing, rap making, choreography making, and writing music. It will be interesting to see what the boys will showcase in their upcoming debut. Also, have you been paying attention to ‘Mix Nine‘? Well, one of the members is also participating in this show!

On top of that, the boys have revealed their ‘Intro‘ MV. It is very traditional with a mysterious touch to it. The music itself is so beautiful to listen to. It is able to show the elegance of their arm gestures. That is until the beat drops and we get to see the boys coordinate with one another to showcase their acrobatic dance routine. It is intense with many member interactions. It makes the whole performance worthwhile and very entertaining to watch.

Meanwhile, BLK will make their hot debut on November 28th! Are you excited? Let us know in the comments below!