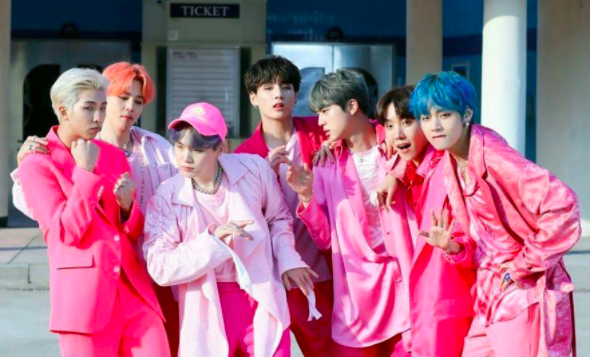 Big Hit Entertainment have teamed up with Columbia Records and Sony music for BTS’ upcoming comeback releasing a official countdown website that features a retro colourful themed countdown, seven all up, as a schedule for upcoming teaser releases. With only showing the countdown in using colour formations it is unknown to what will be released once each timer runs out.

They have announced their official release date which is August 21st this year along with a notice to be the first to hear their new digital single when released if you follow BTS on there, check out the website here!

With the 2nd countdown ending at 12am KST on the 3rd of August, Big Hit released BTS’ first image teaser and also changed their official layout on twitter, an end to ‘Map Of The Soul‘ era and a wonderful welcome to a new era! In the same style as the countdown numbers on the website they have released their reportedly all English title ‘Dynamite’ for their upcoming single. Armys around the world have taken over social media, discovering new emojis relating to ‘Dynamite’ and BTS. ‘Dynamite’ is now also trending at number 2 on Twitter worldwide! Check out the teaser image below!

The anticipation is sky rocketing with each countdown! Are you ready for BTS’ comeback? What do you think their next comeback will be like? Let us know in the comments below!

Scroll for more
Tap
ROCKET PUNCH reveal their six-track highlight medley for ‘Blue Punch’!
J.Y Park and SUNMI party it up with their announcement for collaboration single, ‘When We Disco’!
Scroll