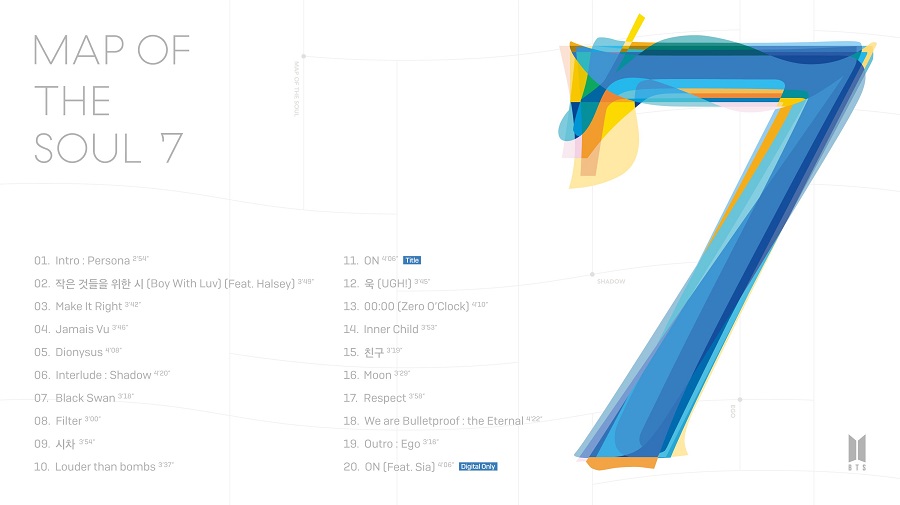 On February 17th, BTS released their track list for their upcoming album, ‘Map Of The Soul: 7’. Check it out below!

This album contains 20 tracks, of which the final 15 are brand new. The first five, ‘Intro: Persona’, ‘Boy With Luv’, ‘Make It Right’, ‘Jamais Vu’ and ‘Dionysus’ were all released as part of the group’s previous album, ‘Map Of The Soul: Persona released in 2019. Furthermore, we have seen comeback trailers based off the songs of ‘Interlude: Shadow’ as well as ‘Outro: Ego’ which were released as member Suga and J Hope‘s solo tracks. Additionally, ‘Black Swan’ was also released on January 17th, with an interpretive dance video, acting as a pre-release digital single before the album would drop.

‘ON’ is confirmed to be the name of the title track off this album, and with a version that features singer songwriter Sia on the digital album, ARMYS are very excited in what is to come.

BTS‘ new album, ‘Map Of The Soul: 7’ will be released on February 21st! How do you feel about the group’s long awaited comeback? Let us know in the comments below!