EXID continues to tease for their upcoming comeback!

EXID continues to tease for their upcoming comeback!

Are you been keeping up with EXID‘s teasers? Well, follow this article to keep up! The girls have dropped their tracklist, as well as two spoiler videos and a highlight medley. So, check it out below! 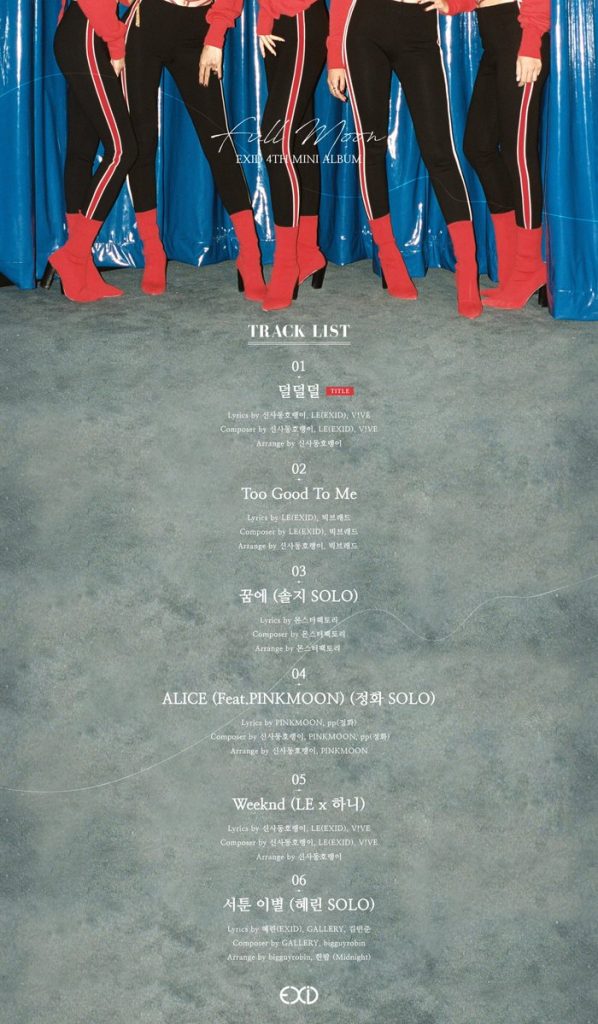 This will be their fourth mini album, ‘Full Moon‘. It contains a total of six tracks including the title track, ‘DDD‘, ‘Too Good To Me‘, Solji‘s solo track, ‘In My Dream‘, Junghwa‘s solo track, ‘Alice‘ featuring Pinkmoon, LE and Hani‘s duet track, ‘Weeknd‘ and Hyerin‘s solo track, ‘Poor Breakup‘.

The girls have also dropped two spoiler videos. In the first video, we get to have a listen to how ‘DDD’ will sound like. It has quite an addictive beat that hooks you in. The sound that accompanies it have fans curious as to how their vocals will fit into this kind of beat.

In the second spoiler video, another part of ‘DDD‘ is heard. It is much slower than the first, allowing fans to feel the rhythm and beat of this track.

Meanwhile, in the highlight medley, fans get to listen to all the tracks. Unlike what we have heard in the ‘DDD‘ spoiler videos, it has a more sexy vibe that contains many unique beats. The next track is ‘Too Good To Me‘ which is quite upbeat and has a soothing vibe to it. ‘In My Dream‘ is able to show off Solji‘s soothing vocals and fans definitely have missed her voice.

‘Alice‘ is also another soothing vocals which give off the sexy vibe. Fans are definitely enjoying the kind of sounds that are coming from this album. ‘Weeknd‘ is quite a beautiful track which hooks you in from the very beginning. Finally, ‘Poor Breakup‘ is another beautiful ballad that allows Hyerin‘s vocals so glow so much.

Unfortunately, it was announced that Solji will not be participating in EXID‘s comeback promotions. Due to her physical limitations and health deterioration, the company has decided to not have her resume activities. However, on November 3rd, Solji will be hosting a radio show every week through V Live until EXID‘s completion of promotions.

Meanwhile, EXID will return with ‘Full Moon‘ on November 7th! Are you excited? Let us know in the comments below!

Scroll for more
Tap
Mind U have given us a charming preview of their upcoming album ‘Dear’
Jeon Soyeon begins to tease for her upcoming debut!
Scroll
Loading Comments...