GOT7 begun teasing for their exciting ‘Eyes On You’ comeback!

GOT7 begun teasing for their exciting ‘Eyes On You’ comeback!

That is right! GOT7 is finally returning with a new album! To get fans excited, they have already released the track list. So, check it out below! 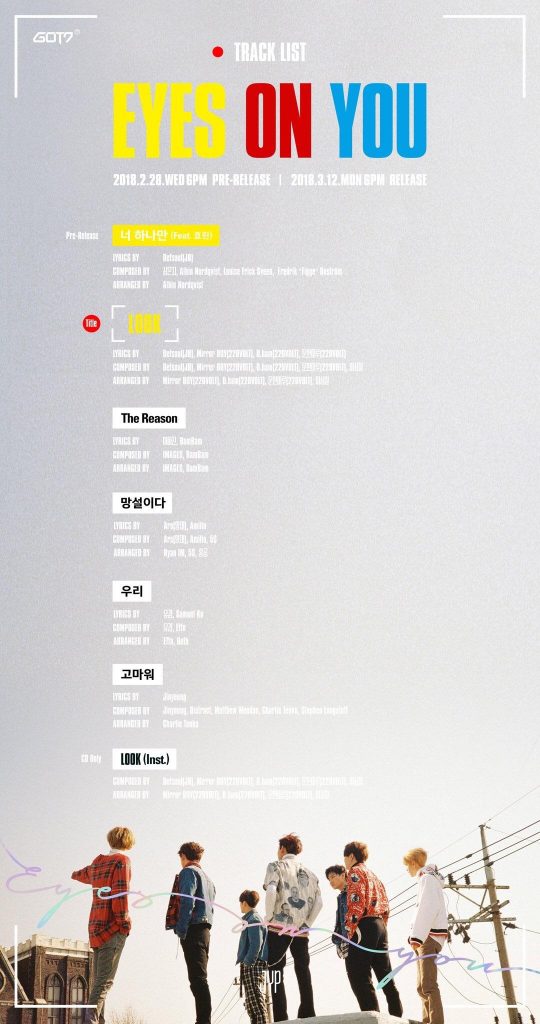 This album will be called ‘Eyes On You‘. If you remember, JYP had recently announced ‘The First Collaboration‘ featuring Hyolyn. Through this track list, it appears that it is GOT7 that will be collaborating with Hyolyn. This track is called ‘Only You’ which will be a pre-released track.

On top of that, there are six other tracks including the title track, ‘Look‘ and its CD only instrumental version, ‘The Reason‘, ‘Hesitating‘, ‘Us‘ and ‘Thank You‘. From this track list, it looks like we will also be getting another JB title track with other members participating in composing and lyric writing of the other tracks!

On top of that, they have revealed the album packaging details. This album will come in three versions: ‘Eyes‘, ‘On‘ and ‘You‘ versions. Each will come with a photobook, a lyrics poster, the CD-R and a photocard. For those who are pre-ordering, they will get the benefit of recieving a poster, a lookbook, 3-cut photo stickers and an event card!

GOT7 will drop their pre-released track on February 28th with their album releasing on March 12th! Are you excited? Let us know in the comments below!