That’s right! GOT7 will be returning with their second Japanese mini album, ‘Turn Up‘. The boys have recently dropped the image teaser that shows what the boys are planning for the month. So, check it out below! 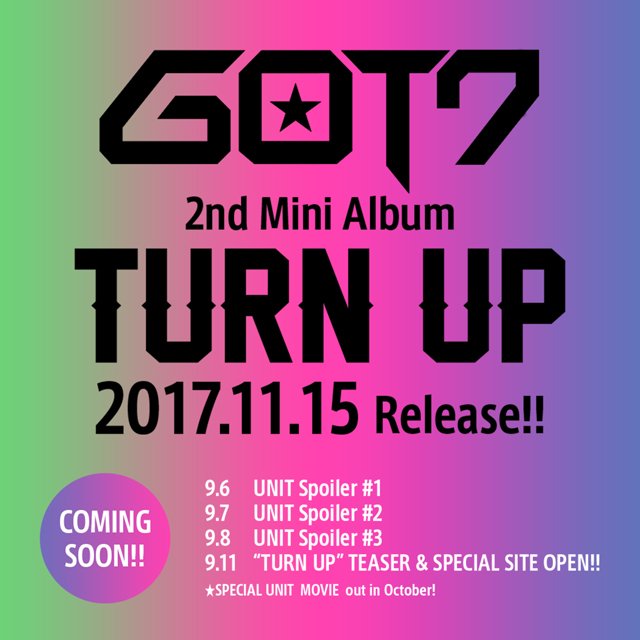 From the image, there will be a total of three UNIT spoilers starting from September 6th to September 8th. They will also release the ‘Turn Up‘ teaser and the opening of their special site on September 11th. There is a lot of things to look forward to in the next following days.

It also looks like the boys will be dropping their ‘Special UNIT‘ movie in October. At this point, the date has not been revealed, it will be coming soon!

It was also revealed that the title track, ‘Turn Up‘ was produced by the one and only GOT7‘s leader, JB. It will be a track that will show off GOT7‘s personality!

Unfortunately, it is revealed that GOT7 will only be promoting as six members in Japan. It was announced that Jackson will be halting his Japanese activities due to needing time to adjust to his schedule, as well as maintaining his health conditions. Thus, with all these reasons, he has decided not to participate in Japanese promotions.

So, GOT7 will be promoting will be of only six members unless there is a special circumstances.

Meanwhile, ‘Turn Up‘ will be dropped on November 15th! Are you ready for this? Let us know in the comments below!