NU’EST reveal magical tracklist for their upcoming album ‘Happily Ever After’!

NU’EST reveal magical tracklist for their upcoming album ‘Happily Ever After’!

NU’EST take us on a once-upon-a-time journey in their tracklist for ‘Happily Ever After’! 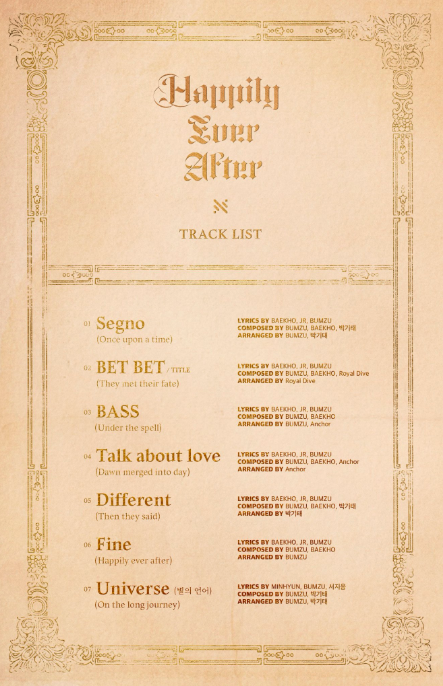 The album will consist of a total of seven songs including, ‘Segno’, title track ‘BET BET’, ‘BASS’, ‘Talk About Love’, ‘Different’, ‘Fine’ and ‘Universe’. Under each of the track titles there is a caption that, when put together reads:

“Once upon a time they met their fate, under the spell drawn merged into day. Then they said ‘Happily Ever After’, on the long journey”.

The NU’EST boys also participated in the making of the album, which have made fans more eager for their much anticipated comeback. ‘Happily Ever After’ is set to drop on the 29th of April, 6PM KST.

Let us know what kind of sound you’re hoping to hear from the boys in the comments below!