Rapper Heize is back with a charismatic rainbow teaser for ‘///’!

Rapper Heize is back with a charismatic rainbow teaser for ‘///’!

The talented artist will be making her comeback at the end of the month! On June 14 the rapper and singer released a grayscale teaser image of herself looking wistful in the rain, with three colourful lines superimposed over the top. 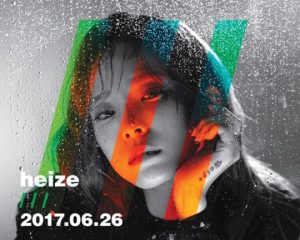 A statement from Heize‘s company states that her comeback EP will be entitled ‘///‘, as seen in the teaser image.

This comeback will be Heize‘s first release since ‘And July‘ in July 2016. ‘And July‘ was her most successful release to date, with singles ‘And July‘ and ‘Shut Up & Groove‘ (both featuring DΞΔN) achieving high rankings on the Gaon Digital Chart. She followed this up with her single ‘Star‘, which peaked at number one on the chart!

With her unique voice and immense skill, Heize is sure to turn heads with her forthcoming release! Heize will be drop her new album /// at 6:00pm KST on June 26.

Keep following Officially KMusic for all the latest comeback news!