Red Velvet had recently revealed the video teaser for their upcoming album, ‘Perfect Velvet‘. Now, they have begun dropping images teasers, as well as a highlight clip for one of their tracks, ‘Look‘. So, check it out below! 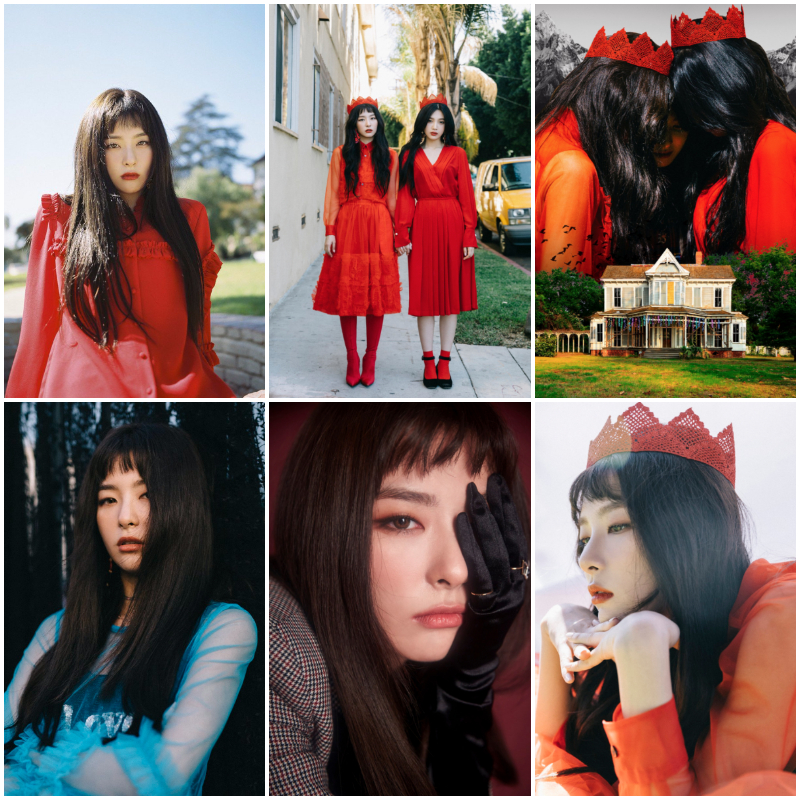 The first member to reveal her image teaser of Seulgi. In two of her images, it features her members. In one of the images, Seulgi holds Joy‘s hand as they stand in the streets wearing very vibrant red outfits. It really goes with their spooky concept and it surely brings out their mature and more serious side. In the other image, she is seen with her members where they form a circle, almost like they are chanting something. On top of that, in front of them is a very lovely house that gives a haunted look.

Seulgi surely fits this spooky theme they are going for. Seulgi shows off her mature look in various images and she looks utterly beautiful in all of them. She is sporting a dark brown hair that helps enhance the mature look she is going for. The look she gives the camera is one that will definitely melt fans’ heart. It is clear to see that Red Velvet has a group that is filled with visuals!

They have also revealed the highlight clip for ‘Look‘. It has a disco feeling with a beat that people would definitely groove to. From the humming shown in this video, it surely fits their voices and fans surely can’t wait to hear more of it!

For those who can’t get enough of ‘Look‘, more is heard in the following Instagram post. Their voices can be heard distinctively in this track, and this kind of disco beat really allows their vocals so really shine. It is surely a song that works well with their vibe.

Meanwhile, Red Velvet has also revealed a preview of their ‘Surround Viewing‘ venue for their upcoming ‘Red Room‘ concert. What is special about this upcoming concert is the fact that the fans will be able to experience it with three large screens. This will allow fans to admire Red Velvet from three different angles! It definitely is going to be a unique experience. This event will be on November 16th at SMTOWN Coexartium.

Red Velvet will make their return with ‘Perfect Velvet‘ on November 17th! Are you excited? Let us know in the comments below!