SF9 signals their return with a comeback schedule!

SF9 signals their return with a comeback schedule!

SF9 has caught fans by surprise with a comeback schedule! They will be making their summer return with their fifth mini album, ‘SENSUOUS‘. So, check out the schedule and first MV teaser below! 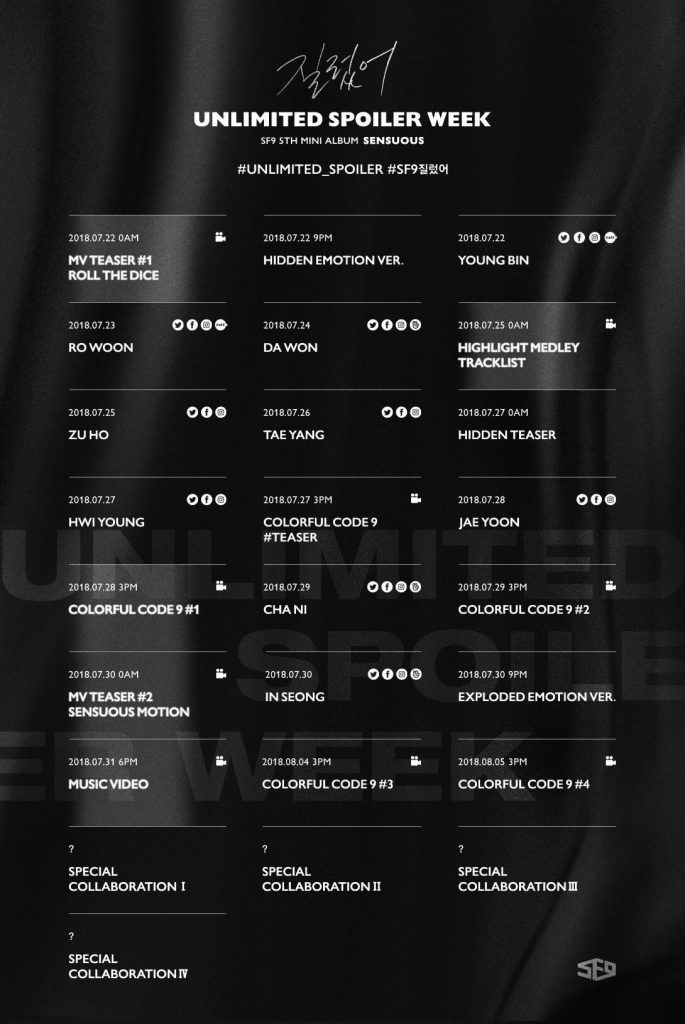 Leading up to their comeback, SF9 has a lot of teasers set for each day. It is definitely looks like a list of unlimited spoilers for their return. In particular, they will be revealing individual images every day starting with Youngbin‘s teaser on July 22nd and ending with Inseong‘s teaser on July 30th. They will also release the highlight medley and tracklist n July 25th. On top of that, there are many other mystery teasers including the hidden teaser scheduled for July 27th and the different colorful code 9 teasers, which are released from July 27th to August 5th.

What is also special about this return is that it looks like there will be four special collaborations! It also appears that the final colorful code 9 teasers may be teasers for these collaborations. Thus, these will be revealed after their official comeback date! On top of that, no information has been revealed about this. However, fans are surely excited to see what they will showcase!

Meanwhile, check out their ‘Roll The Dice‘ video teaser above. From this teaser, we get to hear the intensity of the music. It definitely is building up the hype for their return! Since the teaser is called ‘Roll The Dice‘, many of the members are seen dropping the dice in a dramatic way. This definitely fits the music and the concept.

They have also dropped Youngbin‘s spoiler teaser. No music is accompanying the video, which leaves fans anticipating for more. We see him enter through a random door before running off! What could this mean? One thing to note is that this is not actually the teaser that is listed on the comeback schedule. So, maybe this is an early look into his individual teaser!

SF9 will make their hot return on July 31st. Are you excited? Let us know in the comments below!