STRAY KIDS says ‘I Am NOT’ in new trailer!

STRAY KIDS says ‘I Am NOT’ in new trailer!

Just as the countdown reaches zero, fans are surprised with a trailer for ‘I Am NOT‘. STRAY KIDS have something in store for the fans, yet at this point, it is still a mystery what it can be! So, for now, check out the trailer below!

The video starts with a beautiful narration from Felix and Bang Chan that is accompanied by an eerie sound. It is the kind of sound that one would hear during the beginning of a horror film! The way the beginning was edited was like a sketchy film before we are greeted by the beautiful night sky. There we hear the following lines:

“They say people are born different, but why does it feel like we’re the same? Us, brainwashed into the same system, they expected perfection, so how can we be different?”

This definitely sets the scene for what the boys are going for. It has this futuristic vibe that adopts the kind of storyline one would get for a horror film. The different scenes shown is what some may predict the future to be: people been controlled to continuous study mode while effectively fitting everyone into a certain mould of expectations. It is a twist to the reality of our current society.

An intense sound feels the air, carefully yet diligently building the storyline for their ‘I AM NOT‘ trailer. What could this be about? Is this the build up for their debut? Well, you will have to wait and find out since no official date has been given! Are you excited for what’s to come? Let us know in the comments below! 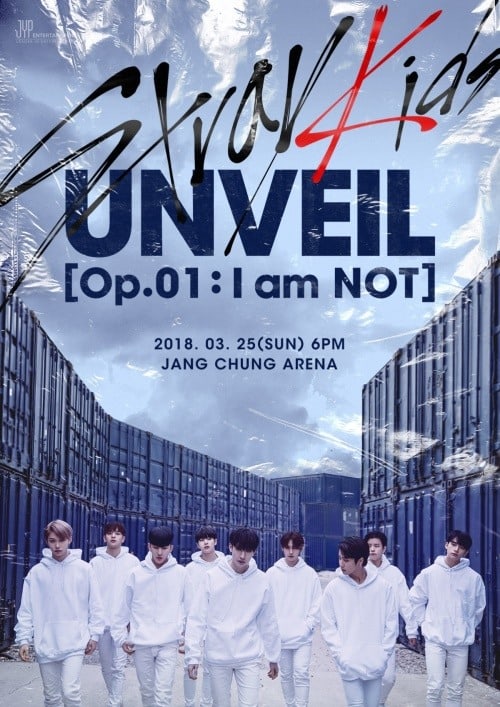 Meanwhile, JYP Entertainment has confirmed that STRAY KIDS will be making their debut soon with this poster. It is revealed that the boys will be having a debut showcase called ‘Stray Kids UNVEIL [OP.01: I Am NOT]‘ on March 25th!