Sunmi has revealed the highlight medley for her upcoming album, ‘Warning‘. So, check it out below!

So, this mini album has a total of seven tracks including the title track, ‘Siren‘, ‘Addict‘, ‘Black Pearl‘, ‘Curve‘, ‘Secret Tape‘ and her previous tracks ‘Heroine‘ and ‘Gashina‘. ‘Addict‘ is quite intense in sound and Sunmi is seen climbing over the couch as dramatic as she can. It goes well with the music and one can’t help but enjoy how she brings her personality to her music. ‘Siren‘ is more upbeat and worthy as a title track. It is the kind she has been showing with her previous title tracks. It appears that she is also teasing how the dance choreography will be like!

‘Black Pearl‘ is a sexy sounding track that works well with her vocals. It is soothing to listen to and one can’t help but get hooked into its melody. It also has a beat that makes it so enjoyable to listen to. ‘Secret Tape‘ has a softer and deeper vibe to any of her other tracks. It allows fans to see that she can do any kind of music and pull it off nicely. 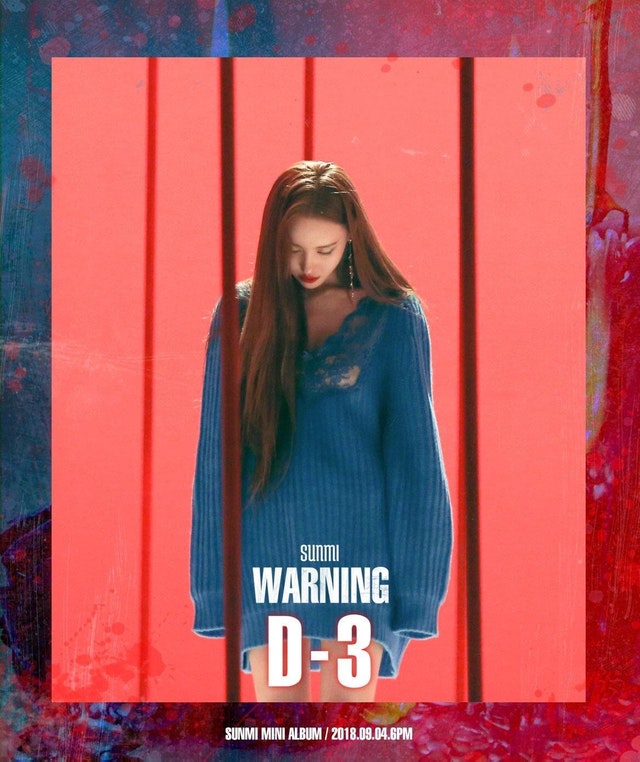 She has also dropped the D-3 teaser. This image still is also seen in her previous MV teaser where she was stuck in the same cage. It definitely has fans more curious as ever as to how the music video will end up like!

Meanwhile, Sunmi is set to make her hot return on September 4th. Which track do you like best? Let us know in the comments below!