Wanna One has dropped the second album photo set +reveals the tracklist and album preview!

Wanna One has dropped the second album photo set +reveals the tracklist and album preview!

Wanna One has released many teasers, showing their mature side.

Wanna One continues to hype fans up with more beautiful image teasers. This time, the boys have revealed group image teasers for ‘Nothing Without You‘. So, check it out below! 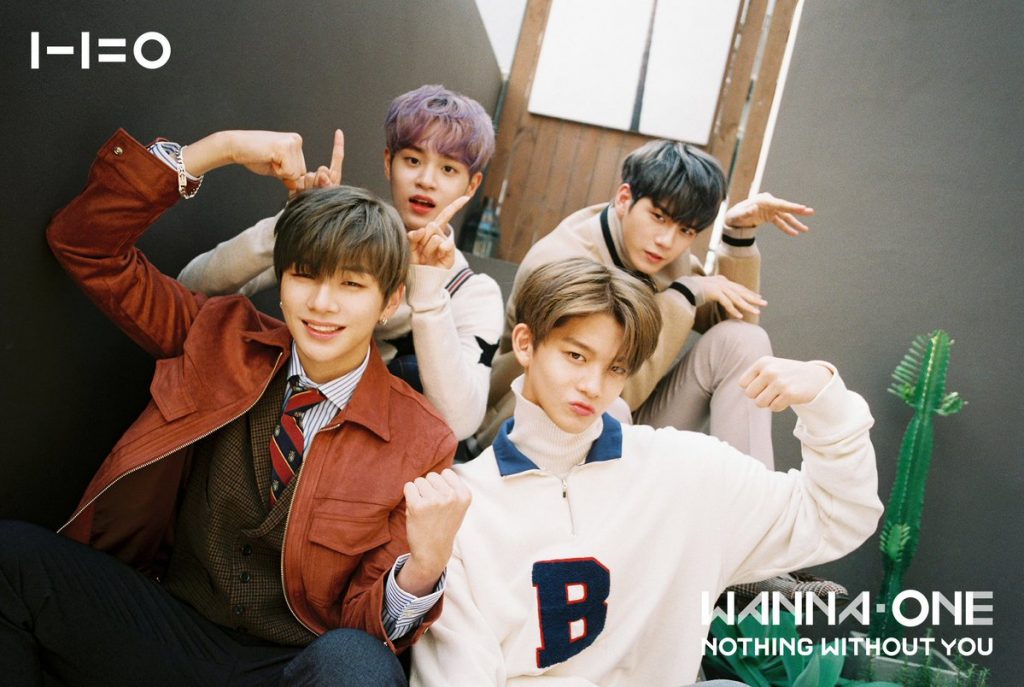 In this first image, we have member Kang Daniel, Ong Seongwoo, Bae Jinyoung and Lee Daehwi in one image. They show off their cute and goofy charms, while still sporting the Autumn vibe. Daniel has a soft smile on, while the rest give the camera a beautiful pose. They look utterly adorable in this image teaser! 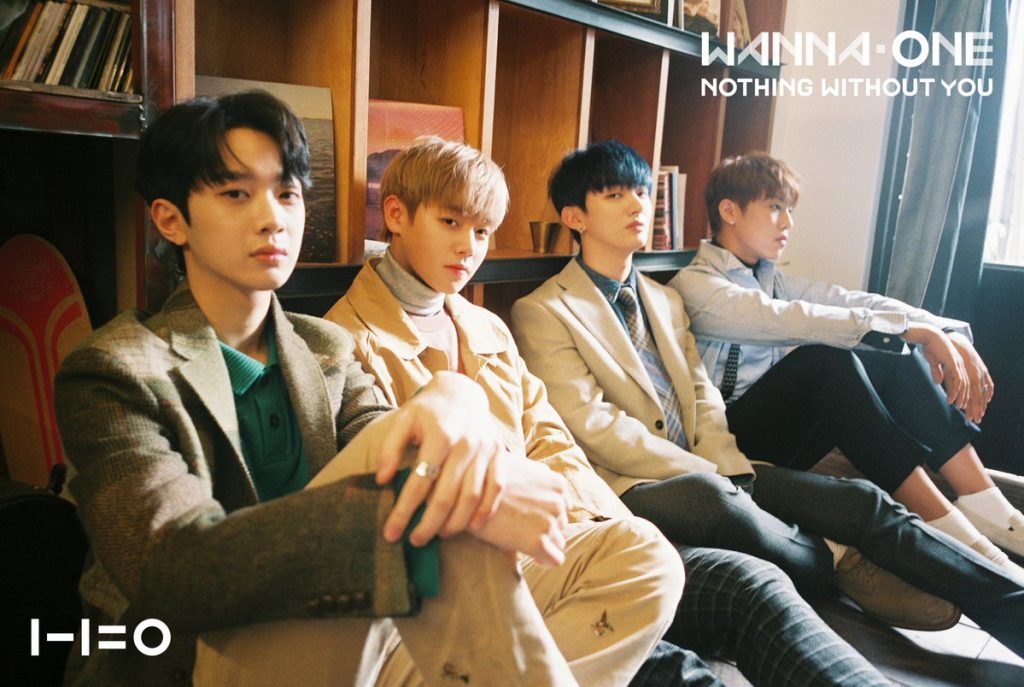 The other image features member Lai Guanlin, Park Jihoon, Yoo Jisung and Park Woojin. Like the other image, they too are sporting the Autumn feeling. They are all wearing thick coats while looking utterly beautiful in the natural sunlight. They are seen enjoying their time at the library and relaxing with one another. 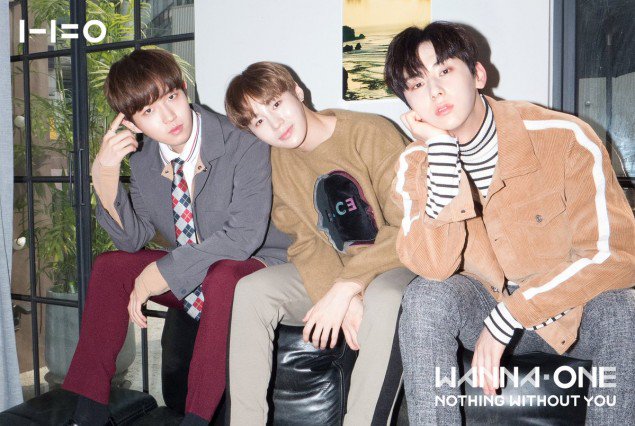 There is still one more image, which features Minhyun, Sungwoon and Kim Jaehwan! The boys are going for a more charismatic side where they show the camera their serious side. However, Sungwoon is the only one with a gentle smile on, allowing the image to brighten up among the seriousness. All three images show different charms of Wanna One.

Finally, Wanna One has revealed a short movie version teaser of ‘Beautiful‘. Intense scenes are seen in this video, where the members are featured boxing or playing pool. The music uses deep cello sound that emphasizes the seriousness of the scene. It definitely shows a more mature aspect of the boys, which is seen in many of their image teasers. Their vocals at the end really help hype up their comeback! 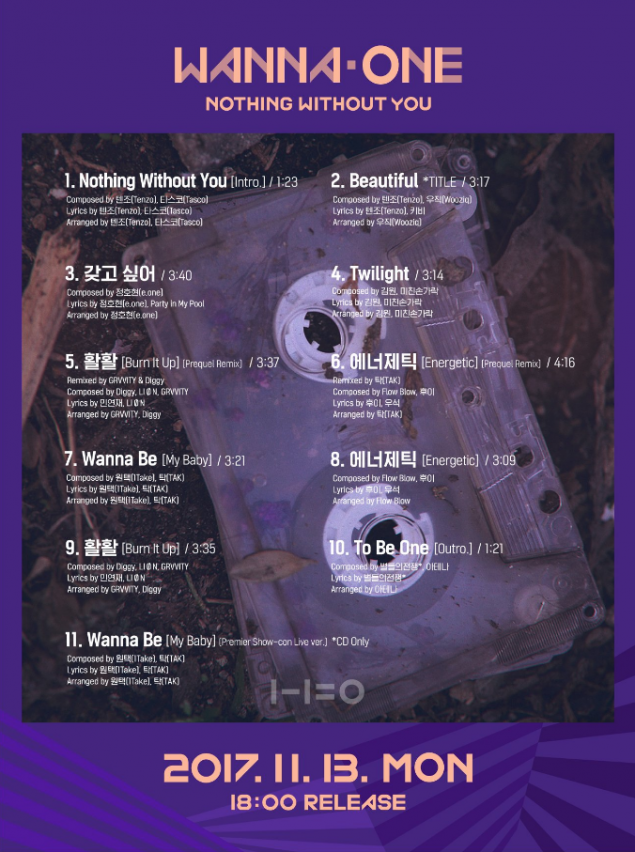 On top of all this excitement, Wanna One has revealed the tracklist for ‘1-1=0 (Nothing Without You)‘. There is a total of eleven tracks including the title track, ‘Beautiful‘, Intro track, ‘Nothing Without You‘, ‘I Want To Have‘, ‘Twilight‘, prequel remix of ‘Burn It Up‘ and its original track, prequel remix of ‘Energetic‘ and its original track, ‘Wanna Be [My Baby]‘, the outro track, ‘To Be One‘ and CD only Premier Show-con live version of ‘Wanna Be [My Baby]‘.

They have also revealed the album preview. It allows fans to admire each track and know how they sound like. ‘Nothing Without You‘ is a sweet track that surely will touch Wannables‘ hearts! Unlike the vibe that was given in the first teaser, ‘Beautiful‘ is definitely a beautiful track that really showcases their vocals. ‘I Want To Have‘ has an attractive beat that works well with their voice and help guide the melody to perfection.

‘Twilight‘ has a different vibe from the rest. It is like ‘Burn It Up‘, but has a darker and slower tone. It is the alternate side that shows Wanna One‘s diversity in music. ‘To Be One‘ is surely a track that ends the album well; it is soft yet has a distinct beat that hooks you in. This album has a deep meaning to the boys and Wannables can surely feel all their sincerity.

Meanwhile, Wanna One will make their hot comeback on November 13th! What do you think about the concept so far? Let us know in the comments below!

Scroll for more
Tap
Byul has dropped not one, not two, but three teasers for upcoming EP ‘Leaves!’
Lovelyz are pretty in pink in ‘Fall in Lovelyz’ b-cut images + Twinkle teaser
Scroll
Loading Comments...