Stray Kids give fans a sneak peek of their debut lyrics

Stray Kids give fans a sneak peek of their debut lyrics

We’re ‘NOT’ ready for Stray Kids’ debut next week!

With their highly anticipated debut, just days away Stray Kids are upping the ante, releasing a heap of exciting new teasers! The upcoming JYP boy group released a series of unique lyric teaser videos in which a few lines from the first four of the eight songs on their debut mini album are paired with their respective instrumentals. Prepare yourself for Stray Kids‘ debut by checking out their lyric card videos below!

The lyrics teaser for ‘NOT!‘ loosely translates as:

There are endless troubles in my mind

I feel more and more confined

Honestly, I don’t know, I am troubled every day

ANSWER ME Then give me the answer

The lyrics card for ‘Mirror‘ loosely translates as:

Just run even though you don’t know where to go

The lyrics card for ‘Awaken‘ loosely translates as:

Tired of living the same life every day

The day I took that same way of thinking

It was difficult and frustrating and I prayed desperately

I hoped and wished that I’d AWAKEN, hold my hand

It appears as though Stray Kids will be making a statement with their debut mini album! Following in the footsteps of their hard-hitting pre-debut track ‘Hellevator‘, the group’s lyrics teasers make an impact. These powerful lyrics are matched by instrumentals with a dark, heavy tone that show the group’s grit and determination.

Stray Kids also released a group photo as part of their official goods teasers, which you can check out below! 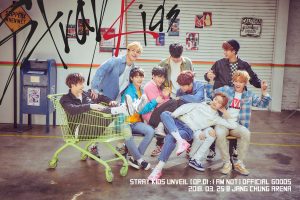 After a lengthy pre-debut period, Stray Kids will finally make their official debut with title track ‘District 9‘ from debut mini album ‘I am NOT‘ at 6PM KST on March 26! Are you excited to hear these tracks in full?

Follow Officially Kmusic for the latest teasers from all your favourite groups!

Scroll for more
Tap
PENOMECO’s peek to a ‘Good Morning’ teaser
The Boyz says it is just ‘The Start’ of their teasers!
Scroll