With only a matter of days left until UNIQ make their long awaited comeback, the five member group is giving fans even more to think about! UNIQ have added a splash of colour following their monochrome first teaser photo, with three of the five members seen wearing red clothing. Only half of each member’s face can be seen in the new teaser, heightening the intrigue around UNIQ‘s comeback. With these teasers coming around two-and-a-half years after the release of their last music video ‘Best Friend‘, Unicorns are sure to be excited to see UNIQ‘s faces. Take a look at UNIQ‘s new teaser image below! 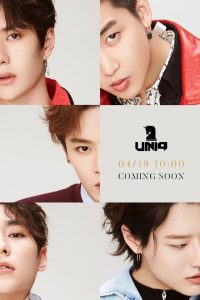 Although their concept is yet to be announced, these sophisticated teasers make it clear that UNIQ‘s comeback will be one to look forward to!

UNIQ will make their comeback at 10AM KST on April 19!

Follow Officially Kmusic for the latest news from your favourite idol groups!