The ‘AGE’ of SEVENTEEN is upon us with the group’s comeback schedule!

The ‘AGE’ of SEVENTEEN is upon us with the group’s comeback schedule!

The countdown to SEVENTEEN‘s comeback is officially on! 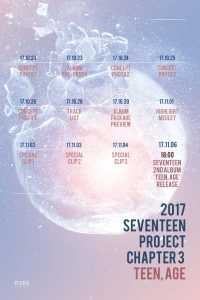 SEVENTEEN‘s comeback schedule predominantly uses the group’s official fan club colours, resulting in a calming colour scheme. Fans of the group have a lot to look forward to even before they make their comeback, with SEVENTEEN planning to release a teaser almost every day starting from October 23!

SEVENTEEN‘s pre-comeback promotions include four concept photos, their album tracklist, a preview of the album packaging, and a highlight medley, before wrapping things up with three special clips.

In the lead up to their new album, the group have been undertaking ‘Chapter 0.5’ of their self-titled ‘SEVENTEEN PROJECT‘. The project has seen SEVENTEEN‘s leaders, hip-hop team, performance team, and vocal team all release an individual song and accompanying music video. The group’s upcoming album marks the beginning of the third chapter of the ‘SEVENTEEN PROJECT‘.

SEVENTEEN will make their comeback with their second full album ‘TEEN,AGE‘ at 6PM KST on November 6!

Scroll for more
Tap
Yuju and Jihoo send a ‘Signal’ that you should be getting excited about their collaboration!
TWICE drop super cute ‘Twicetagram’ tracklist!
Scroll
Loading Comments...