The bright and bubbly duo released a teaser for their upcoming music video ‘It Will Be Good‘. Check it out below!

The short clip sees Ahn Hyung Seob and Lee Eui Woong exploring their city. From the illuminated city streets at night, to a bridge over a winding river, the pair seem to take in each aspect of their surroundings with a youthful excitement. The reflective acoustic guitar paired with cinematic strings creates a nostalgic soundtrack to the viewer’s thoughts before a preview of the vocal line comes in.

‘It Will Be Good‘ is not the only track on Ahn Hyung Seob and Lee Eui Woong‘s first project album! The duo have also released a visually appealing tracklist, which you can see below. 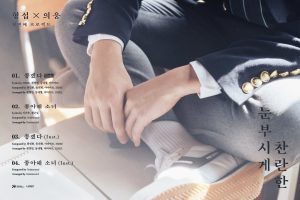 The pair’s album ‘Blindingly Radiant‘ will also contain the track ‘I Like You Girl‘ (literal title), as well as instrumental versions of both tracks.