DREAMCATCHER drop bohemian and black chic concept photos ahead of their 1st album release, ‘Dystopia: The Tree of Language’! 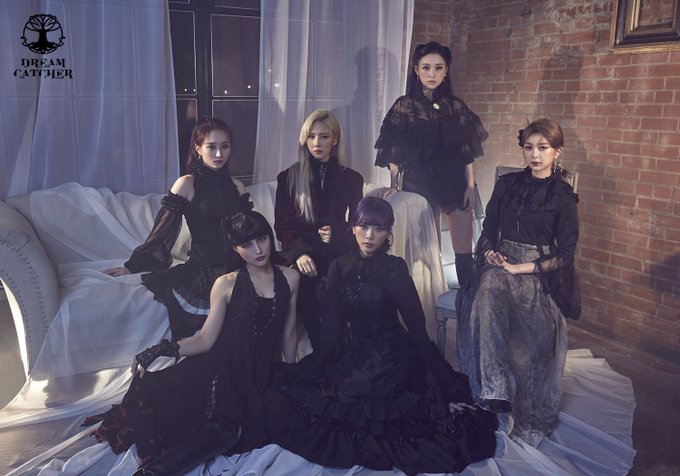 DREAMCATCHER drop bohemian and black chic concept photos ahead of their 1st album release, ‘Dystopia: The Tree of Language’!

From February 4th through to the 7th, Dreamcatcher released 4 sets of concept photos for their 1st full album comeback, ‘Dystopia: The Tree of Language’. The photos were labelled as the ‘E’, ‘V’ and ‘I’ versions. Check them out below!

‘DYSTOPIA: THE TREE OF LANGUAGE’ CONCEPT PHOTOS (‘I’ VERSION):

The three concepts give off different feelings towards each of the pictures, giving a sense of mystery towards the overall concept of the album. In the ‘E‘ version of photos, the members are wearing floral bohemian styled , free flowing dresses. With accents of orange in the makeup, and feathered accessories, along with the nature background, it shows a very different look to what the group generally wears.

The ‘V‘ version of the individual concept photos show the members in all-white outfits. It is then complimented with glittery makeup and featuring some of form of metal in the embellishments. Whether it be a harness, chain or zipper, the members are shrouded by a black lace-y material, bringing contrast to the photos. Similarly, the group photo shows instead the members wearing all-black outfits, surrounded a white lace.

Photos found in the ‘I‘ version show mainly the group sporting dark lace dresses whilst being around a dark forest, with trees bear, and an eerie feeling overall. Member Sua is also carrying a sharp sword, adding intrigue to her photo particularly.

There will be more released up to the group’s 1st full album release since debut, ‘Dystopia: The Tree of Language’ on February 18th, 6PM KST!

Member Handong will not be participating in this comeback as she is currently busy with schedules in China. However, she will return after her schedules have finished. This marks the group’s return in approximately 5 months since their previous mini album, ‘Raid of Dream’. How do you feel about Dreamcatcher‘s comeback? Let us know in the comments below!