We can already tell this collab is going to be super cute!

The image was posted to IZ‘s official SNS sites accounts at 12AM KST. Take a look below! 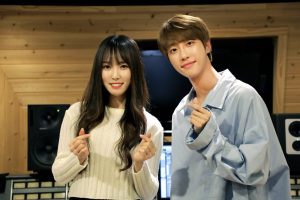 GFriend recently made a comeback with ‘Summer Rain‘, whilst IZ only debuted in August with ‘All You Want‘! With the collaboration of two main vocalists, music fans are in for a treat with this new song!

According to a statement from IZ‘s company Music K Entertainment, ‘Heart Signal‘ will be a sweet song about a boy and a girl confessing their feelings to each other. It is set to be a dynamic composition featuring orchestral instrumentation, but also using a swing section to change the mood.

‘Heart Signal‘, the collaboration track between GFriend‘s Yuju and IZ‘s Jihoo will be released at 6PM KST on October 27!