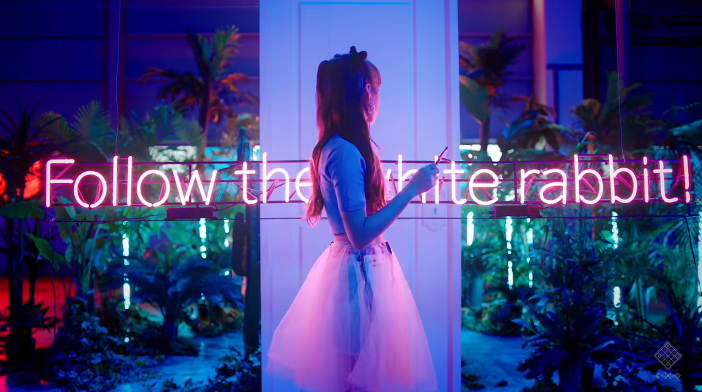 On April 19th, GWSN dropped the track list for their 4th mini album, ‘The Keys’, with it announcing the title track, ‘BAZOOKA!’. On the same day, they released the first MV teaser for the track. Check them out below!

First looking at the track list, the album will contain four tracks including the title track, ‘BAZOOKA!’. Other tracks include, ‘Wonderboy, the Aerialist’, ‘Tweaks (Heavy cloud but no rain)’ and ‘After the bloom (alone)’. The unique naming of the tracks are causing fans to be more intrigued as to the concept of this comeback.

Moving to the MV teaser, it starts off with a quote:

‘All contents are absorbed in the only dominant form of the medium. Only the medium can make an event.’

We then cut to a shot where member Seoryoung finds a door standing around a mini forest of plants with a neon sign across stating ‘Follow the white rabbit!’. She finds a key next to the door before the powerful fun beat of the title track kicks in. After seeing beautiful shots of all the other members, Seoryoung decides to insert the key, unlocking the door and entering to the other side.

This comeback will mark the group’s return since July 2019 with the completion of their album trilogy, ‘The Park in the Night Part Three’, and title track, ‘Red Sun’. Member Soso will not be participating in this comeback due to a fractured ankle, hence the group will promote as six members for the time being.

GWSN‘s 4th mini album, ‘The Keys’, along with the title track, ‘BAZOOKA!’ will be released on April 28th, 6PM KST! How do you feel about GWSN‘s teasers? Let us know in the comments below!