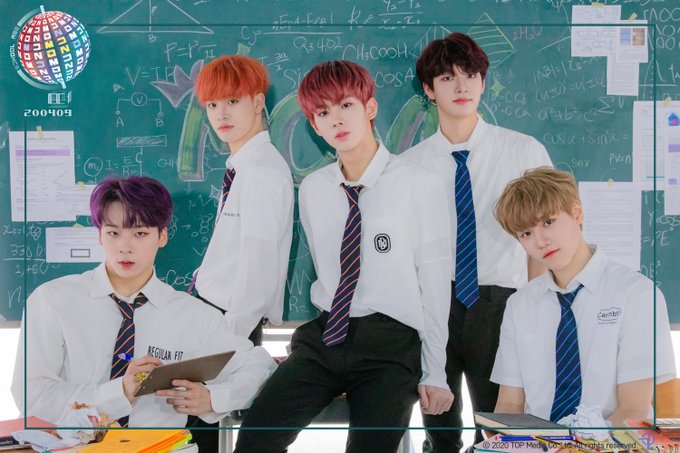 On April 3rd, TOP Media‘s rookie boy group, MCND, released concept photos for their 1st comeback, ‘Spring’. Two days later, they dropped a lyric teaser for the track. Check them out below!

The concept photos show the group wearing school uniforms all behind either a fully drawn chalkboard, or behind a row of lockers. Thus, it is giving a hint the group will go with a lighter school boy concept this time round. This contrasts from their debut track, ‘Ice Age’ which showed the group’s darker, charismatic side.

“I’ll take you there safely, welcome to my world”, “Go up, higher and higher”, and “Let’s go higher to space, fly now, fly now, fasten your seat belt”.

This marks a speedy comeback for the group with their debut recently in February this year with their 1st mini album, ‘Into the Ice Age’. The group only finished promoting the track on March 29th and just a week later, fans have to get ready for their comeback.

‘Spring’ is the title track off their new album, ‘School Age’ which will be released April 9th!

How do you feel about the group’s fast comeback? Let us know in the comments below!

Scroll for more
Tap
CRAVITY drop track list and first concept photos for ‘HIDEOUT: REMEMBER WHO WE ARE’
GOT7 will take you back in time in cinema trailer for ‘Dye’
Scroll