SEVENTEEN reveals the tracklist for ‘TEEN,AGE’

SEVENTEEN reveals the tracklist for ‘TEEN,AGE’

Having revealed four sets of image teasers, SEVENTEEN has revealed the tracklist for their upcoming second album, ‘TEEN,AGE‘. So, check it out below! 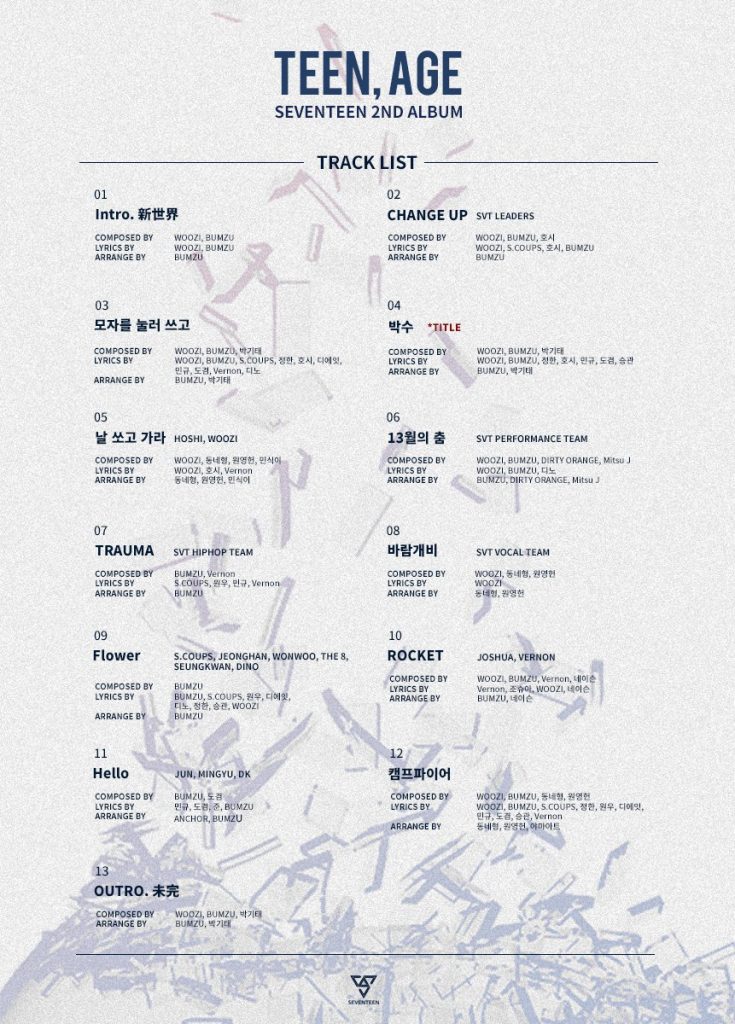 For this album, there will be a total of thirteen tracks! This includes the title track, ‘Clap‘, the intro track, ‘New World‘, ‘Pulling Hat Over Eyes‘, ‘Shoot Me‘, ‘Flower‘, ‘Rocket‘, ‘Hello‘, ‘Campfire‘ and the outro track, ‘Unfinished‘. In this album, it will also feature the Unit tracks including the Leaders Unit‘s ‘Change Up‘, HipHop Unit‘s ‘Trauma‘, Performance Unit‘s ‘13 Month Dance‘ and the Vocal Unit‘s ‘Pinwheel‘.

What is also quite exciting about this album is the members’ participation in their albums. Members including Woozi, Hoshi and S.Coups had helped in composing some of these tracks. On top of that, every member had participated in the lyrics for many of the tracks. This definitely has Carats excited to see what the boys will showcase this time around.

Meanwhile, SEVENTEEN will make their grand return with ‘Clap‘ on November 6th! Which title has caught your attention? Let us know in the comments below!