Wanna One release intense teaser for ‘Nothing Without You’

Wanna One release intense teaser for ‘Nothing Without You’

With just under a month left until their comeback, Wanna One have surprised Wannables with a new teaser!

The teaser features both part of debut song ‘Energetic‘ and a preview of the group’s next title track. Check it out below!

Wanna One‘s new teaser plays with the idea of a darker concept for the group. The group’s upbeat dance track ‘Energetic‘ is cut jarringly short as an animated cassette is rewinded. Each member of Wanna One is then shown with only a small amount of light illuminating a sliver of their faces. These individual clips are cut with a countdown which reveals the group’s centre member Daniel upon reaching 0:00.

In addition to this, the teaser also shows a number of clips that include date stamps. The dates include Wanna One‘s debut date August 7 2017, as well as dates that are most likely related to important events from the second season of Produce 101 such as January 5 2017, December 18 2016, November 11 2016, and October 4 2016, all in reverse chronological order. Images of a shrivelling flower and a crushed cassette tape are also shown alongside a pendant , as well as the Pantone colour code for the dark purple featured heavily throughout the teaser. 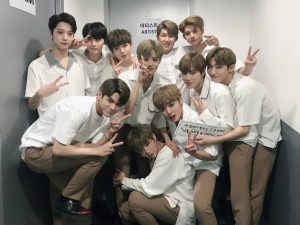 The last few seconds of the teaser are dedicated to a section from what is presumed to be Wanna One‘s comeback title track. Simple piano chords accompany a hopeful-sounding vocal melody sung by two voices an octave apart.

Wanna One‘s teaser raises more questions than it answers, and fans still have a few weeks to wait until the group’s comeback! Wanna One will release their repackaged mini album ‘1-1=0 (Nothing Without You)‘ on November 13!