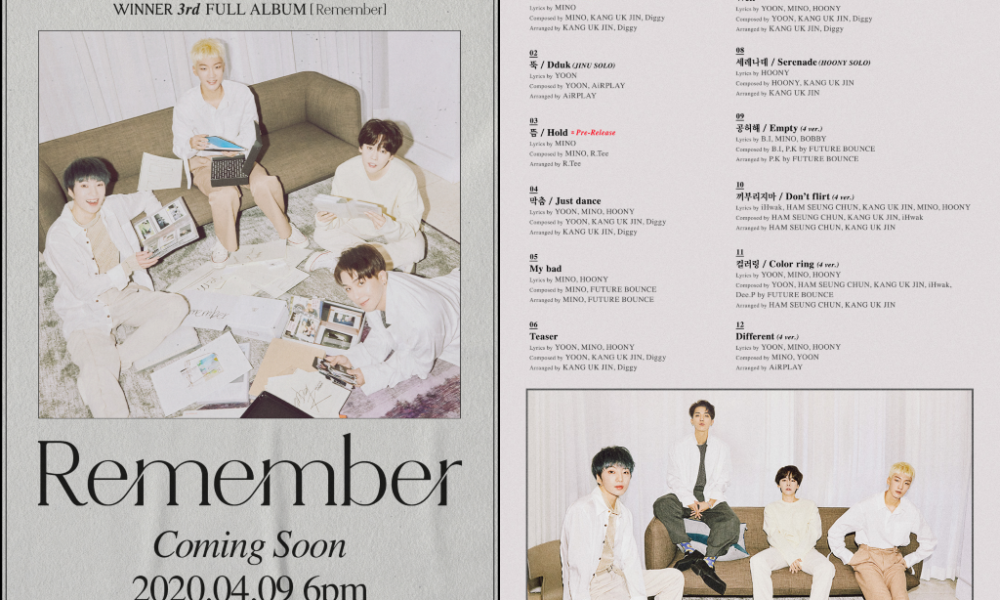 On March 30th, WINNER released a concept poster for their 3rd full album, ‘Remember’. On the following days, they further dropped two concept videos and the track list for the album. Check them out below!

In the poster, we see the members all relaxing whilst looking at photo books together, creating a family vibe. The first concept video then shows this process with the members all together, having fun with each other. This is all whilst a happy guitar melody plays in the background.

The second concept video has a slight contrast with a trap like melody and the members serving chic looks in black outfits. The video narrates in English that someone used to be empty, but they found a lover when they crossed their hearts. The last quote states to “remember me and we’ll be everlasting”. This gives a signal to the recent reports that WINNER will be taking a break from team activities after this album.

Moving on to the track list, the album will feature 12 tracks, including the already released, ‘Hold’ on March 26th, and title track, ‘Remember’. There will also be member Jinu‘s solo track, ‘Dduk’, and Hoony‘s solo, ‘Serenade’, being the only two solos on the album. Furthermore, there are the 4 member versions of the tracks, ‘Empty’, ‘Don’t Flirt’, ‘Color Ring’ and ‘Different’. All these tracks were previously released back in the group’s earlier days when the group used to have five members, with former member Taehyun, who left the group in November 2016.

In other news, member Jinu recently enlisted into the military on April 2nd, meaning he will be unable to participate in the group promotions for this album.

How do you feel about the teasers? Let us know in the comments below!