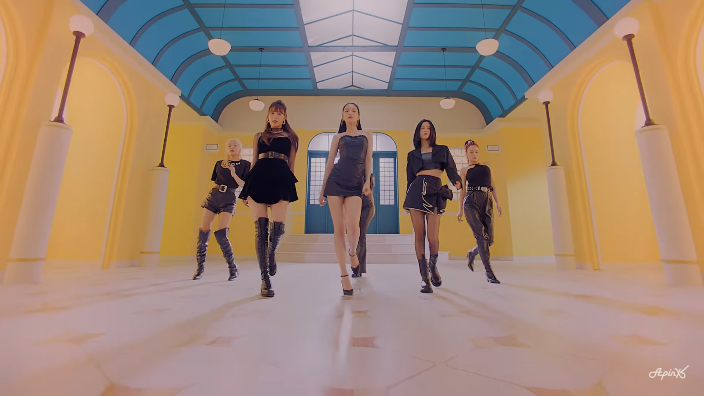 On April 10th, APINK released the highlight medley for their 9th mini album, ‘Look’. Two days later, they dropped the first MV teaser for the title track, ‘Dumhdurum’. Subsequently, the day after, they released the second MV teaser. Check them out below!

The highlight medley shows audio snippets of all seven tracks on the mini album. The first shot shows an old desktop interface with the mouse clicking on to the ‘Apink’ folder which opens up all the snippets. There is a good mixture of genres with a range of faster tracks like the title track ‘Dumhdurum’ and ‘Be Myself’, and slower jams which show off the colour of the group’s vocals like in ‘Overwrite’ and ‘ “I Love Every Moment Of You’ (literal translation).. The medley ends with an instrumental of the title track featuring a catchy repeating synth melody.

Moving on to the first MV teaser, we hear a rolling delicate synth in the background. We see beautiful shots of all the members in their individual sets, all with different colour tones. For example in Eunji‘s set there are many lamps surrounding her, giving the whole room a dull yellow tone whilst she sits on a plaid fabric chair.

The second MV teaser shows more of the performance side to the track. We first see a luggage being pulled inside a train carriage before the catchy repeating synth melody in the highlight medley kicks in. The members strut their way into formation before performing a girl crush choreography in all black outfits. The teaser ends with the group all inside the train carriage.

APINK‘s 9th mini album, ‘Look’, along with its title track, ‘Dumhdurum’ will be released on April 13th (today), 6PM KST!

The group’s last comeback was way back in January 2019 with their 8th mini album, ‘Percent’ and accompanying title track ‘Eung Eung’. So, it has been well over a year since the group’s return and fans are extremely excited to hear their new music. How do you feel about APINK‘s upcoming return? Let us know in the comments below!

Scroll for more
Tap
CRAVITY are ready to ‘Break All the Rules’ in MV teaser
GOT7 drop a packed track list for mini album, ‘Dye’!
Scroll