MAMAMOO’s Solar shows her claws and fiery bad-ass side in intro and concept teasers for ‘Spit It Out’! 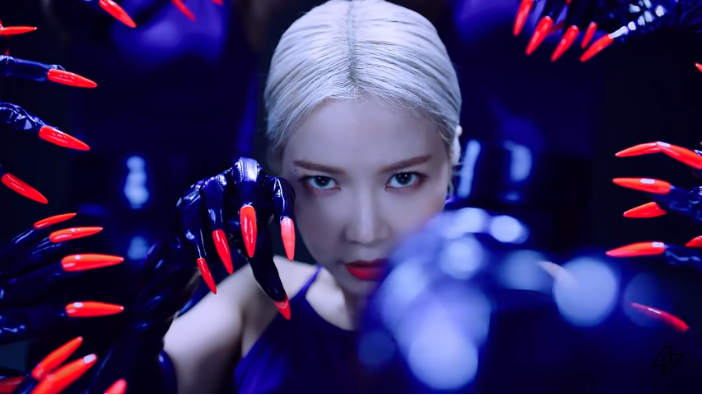 MAMAMOO’s Solar shows her claws and fiery bad-ass side in intro and concept teasers for ‘Spit It Out’!

On April 13th, MAMAMOO‘s Solar released her 1st intro teaser for her solo debut mini album, ‘Spit It Out’. Four days later on the 17th, she dropped the special version of the concept teaser ahead of the album’s release. Check them out below!

Looking first at the intro teaser, we see the singer in the centre of a dance formation. Everyone is wearing the same navy coloured top and shiny pants. These are all embellished with shiny gloves with long red fingernail tips that resemble claws. The dancers all move their claws to the minimal beat behind, and overall the video has a clean sharp quality to it.

To contrast, the concept teaser starts off with burning flames from a car and we see the MAMAMOO member sitting seriously with a wedding dress veil over her, surrounding by lit candles. It then moves to a scene of flickering lights where she is wearing a gold outfit with long black boots, as she looks chic-ly into the lens. The video ends with a dramatic shot of her with no hair.

Solar‘s 1st solo album will be released on April 23rd, 6PM KST. The singer has previously released cover tracks as part of her ‘Solar Emotion’ project which ended in 2018. She also has collaborated in K-Drama OSTs , an example being back in 2015 with actor Kim Minjae with the track, ‘Star’ from the TvN drama, ‘Second 20s’. Hence, this will be the first official release of original music as a solo artist.

How do you feel about Solar‘s teasers? Let us know in the comments below!