Rainz will add some ‘Sunshine’ to your day with their debut release schedule!

Rainz will add some ‘Sunshine’ to your day with their debut release schedule!

It isn’t long until project group Rainz make their debut!

The seven member boy group have unveiled their release schedule for debut mini album ‘Sunshine‘. Check it out below! 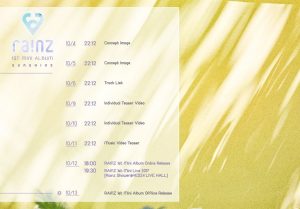 With less than two weeks left until Rainz debuts, fans of members Kim Seong Ri, Byun Hyun Min, Seo Sung Hyuk, Lee Ki Won, Jang Dae Hyeon, Ju Won Tak and Hong Eun Ki are set to be treated to lots of official content from the group! Rainz‘s pre-debut promotions consist of two sets of concept images, the ‘Sunshine‘ album track list, two days of individual teaser videos and a music video teaser. The group will be releasing new teasers at 10:12PM KST every day for a week starting from October 4, with the time being a sneaky reference to their debut date!

Earlier this week Rainz announced their fan club name as well as their official colours. Although the group will be debuting in the midst of comebacks from a number of industry heavyweights, the group’s jam-packed teaser schedule and their following from ‘Produce 101‘ suggest that Rainz will be able to make themselves heard in a busy month in K-pop!

Rainz‘s debut mini album ‘Sunshine‘ will be released at 6PM KST on October 12.

Scroll for more
Tap
GOT7 has dropped the Hyung Line’s image teasers for ‘7 For 7’ comeback!
NCT’s Doyoung and gugudan’s Sejeong continues to tease for their upcoming SM STATION track!
Scroll
Loading Comments...