TRCNG continues to tease for their upcoming debut.

TS Entertainment’s upcoming boy group, TRCNG, continues to tease fans for their upcoming debut! The boys will be dropping their first mini album, ‘New Generation‘. To get fans excited, they have revealed the highlight medley, so check it out below!

This album will consists of six tracks including the title track, ‘Spectrum‘, ‘Ray Of Light‘, ‘My Very First Love‘, ‘I’m The One‘, ‘Don’t Stop The Dancing‘ and ‘0 (Young)‘. So, the first track to be revealed is ‘Ray Of Light‘. It has a tropical sound where their voices are quite soothing to listen to. It definitely has the vibe that people would really enjoy to listen to. ‘Spectrum‘ has a magical feeling where they don’t give much away. It definitely has fans quite curious as to how their voices will sound like against this melody.

On top of that, ‘My Very First Love‘ also has the sweet vibe that works well with its title name. It is quite soothing and the acoustic guitar helps enhance the beauty of their voices. ‘I’m The One‘ is quite an upbeat song where they show off their amazing vocals. It has a trendy vibe that will definitely get people hooked to their music.

‘Don’t Stop The Dancing‘ is also another hype song that works nicely with their vocals. This kind of beat works really well with their voices and fans can’t wait to hear the full track. The last track is ‘0 (Young)‘ where they have slowed down the beat. It is a most relaxing and soft song that allow fans to fully appreciate their singing ability. It goes to show their potential to succeed in the K-pop world! 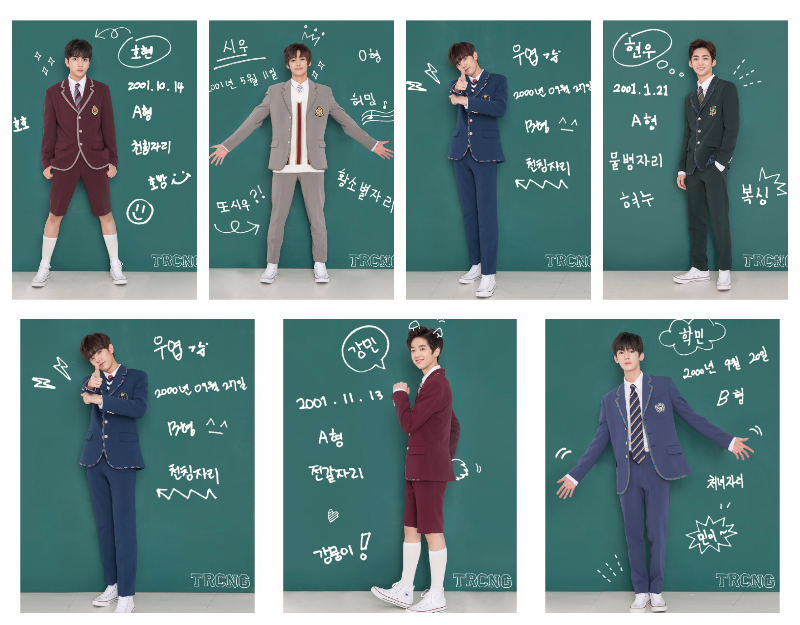 On top of that, the first seven members have dropped their individual profile images! What do you think about the boys wearing these cute uniforms? Which member stands out?

TRCNG will make their debut on October 10th! Which track had caught your attention? Let us know in the comments below!

Scroll for more
Tap
DIA will be back before you know it!
UP10TION drops their comeback schedule!
Scroll
Loading Comments...