DIA will be back before you know it!

DIA will be back before you know it!

Girl group DIA have announced the date for their comeback!

DIA‘s first repackage album entitled ‘Gift‘ (literal translation) is due out next month! The group released a teaser image featuring all nine members standing in a forest. The girls are all wearing different styles of dark coloured dresses which, when combined with the misty scenery, give the group a mysterious charm. Take a look at the teaser photo below! 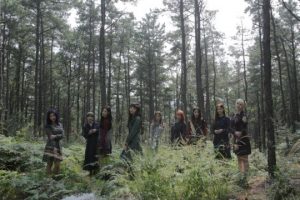 DIA‘s title track from their upcoming ‘Gift‘ album will be called ‘Good Night‘. This track sees the group team up with renowned composer Kim Seung Soo, who has worked on hits such as TWICE‘s ‘Signal‘ and IOI‘s ‘Very Very Very‘. ‘Good Night‘ is described by DIA‘s agency MBK Entertainment as containing the feelings of a girl who has just returned home from a date. It will have a tropical sound and cute, catchy lyrics.

Unfortunately for fans ‘Good Night‘ promotions will see only seven members of DIA take the stage, as Yebin and Somyi will be appearing on upcoming survival show ‘The Unit‘. However fans can look forward to the pair’s upcoming duet ‘Seoraksan in October‘!

DIA will make their comeback with repackage album ‘Gift‘ and title track ‘Good Night‘ on October 12.